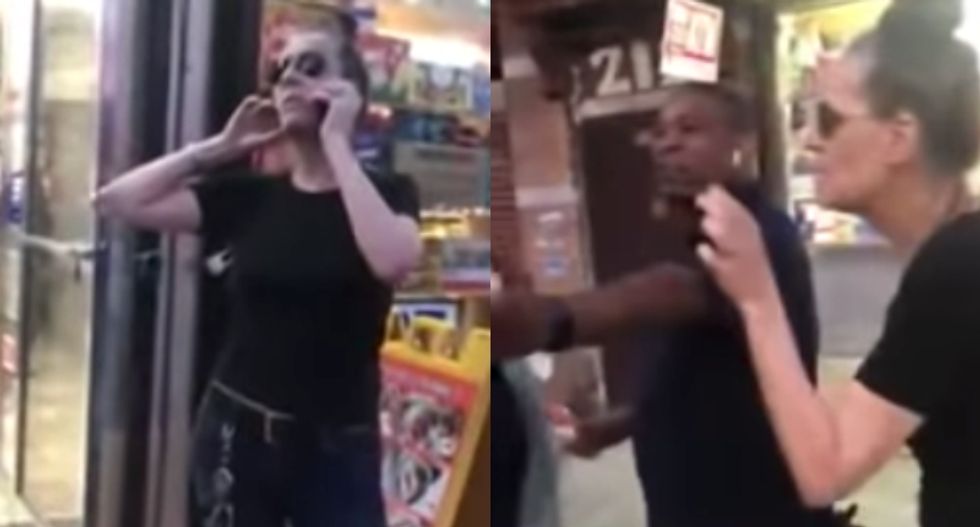 A white woman — nicknamed "Cornerstore Caroline" — calls police on a young black boy for brushing against her. Images via screengrab.

A white woman called police on a nine-year-old black boy for an alleged "sexual assault" — but onlookers said the child merely brushed up against her.

The video, posted Wednesday by Facebook user Jason "Stovetop" Littlejohn, begins with the woman standing and talking on the phone as the boy's small sibling is heard crying for his mother, who was also present.

"The son grabbed my ass," the white woman told the police operator. "And she decided to yell at me."

"I just was sexually assaulted by a child," she said moments later.

As onlookers made a commotion on the street, people began walking up to check out the scene. At one point, another white woman walked up and, in the direction of the woman on the phone, exclaimed "are you seriously calling the police?"

The man filming noted that the woman he nicknamed "Cornerstore Caroline" was calling the police because "a little kid brushed up against her and touched her on her butt."

"Why don't you upload that to Worldstar," the woman said to the man filming, referencing the popular Worldstar Hip-Hop website where videos go viral.

In the video, the woman listed an address in the Flatbush neighborhood of Brooklyn, New York — a largely African-American and Caribbean neighborhood in the process of gentrification. Flatbush is part of the district represented by a New York state senator who proposed a law that would make calling the police on innocent black people illegal.

At two points in the video, the woman who called the police on the child identifies herself as a "cop."