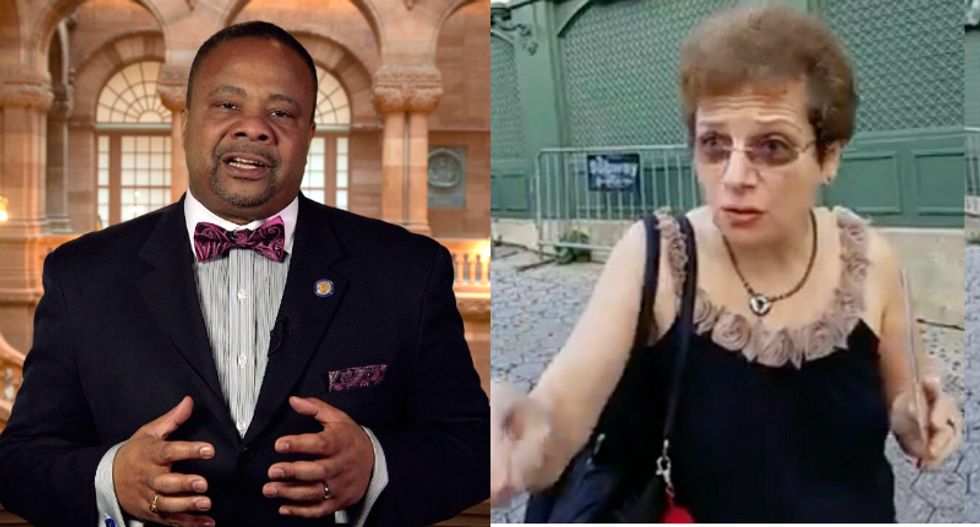 NY State Sen. Jesse Hamilton (left) and the woman who called the police on him for passing out anti-Trump campaign literature (right). Images via screengrab.

A New York state senator has proposed a law that would make calling police on innocent black people a hate crime after a Trump supporter called police on him when he was canvassing constituents.

The state legislator himself was the subject of such a call last week when a self-identified Trump supporter called the police on him when he was handing out campaign literature critical of the president.

Video of the incident showed the woman speaking with a thick European accent and berating Hamilton for the message on his literature, which informed voters that he would "fight back [against] Trump." She is also seen calling 911 in the video.

"Waiting for your friends at a Starbucks is not a 911 call — it's a call of intimidation," the state senator said, referencing infamous instance earlier in 2018 when a Starbucks manager called police on two black men sitting inside the store who were doing nothing wrong.

"That's gonna be a hate crime," Hamilton said. "This pattern of calling the police on black people going about their business and participating in the life of our country has to stop."

If his proposed law were to be passed, the onus of investigating whether a call was legitimate or made with the intention of harassing or intimidating someone would be on the police.

One Brooklynite who stopped to hear the state senator speak outside of a Flatbush subway station took issue with Hamilton's proposed means of handling the issue.

"We're putting responsibility in the hands of an institution that's really predatory," the man told Patch. "I wouldn't feel comfortable with that."

You can watch video of the angry Trump supporter calling the cops on the legislator below: