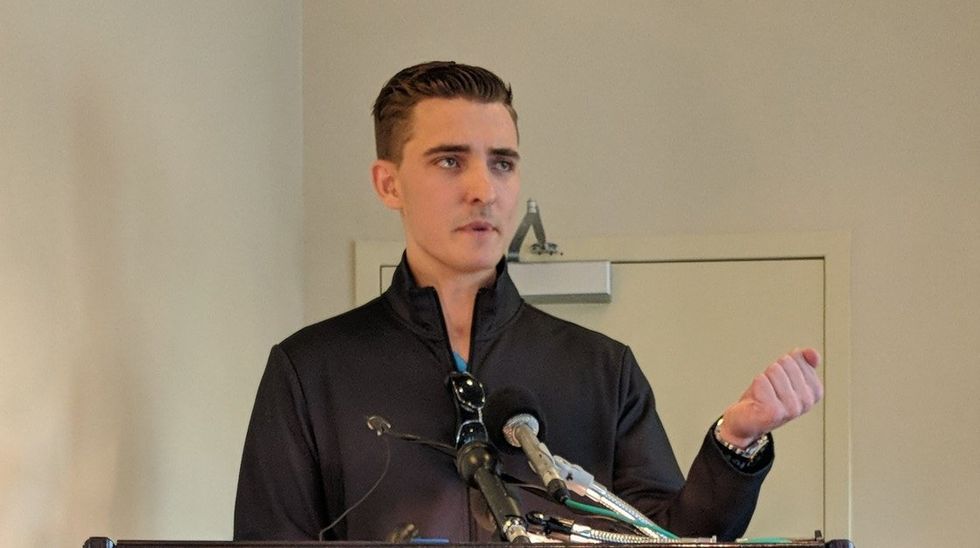 Trump supporters Jacob Wohl and Jack Burkman on Thursday held a press conference in a Holiday Inn conference room where they accused special counsel Robert Mueller of raping a woman whose name they apparently misspelled.

Although Burkman and Wohl both vowed that the purported victim of Mueller would be at the press conference to tell her story, she supposedly decided to cancel at the last minute -- leaving the two Trump supporters alone to take questions from highly skeptical reporters.

It was one of the most inept attempts at a political smear campaign in American history -- and it was loaded with comedic gold. Here were the five funniest moments.

1.) Wohl accuses Mueller of planting a story about him having jury duty back in 2010 in anticipation of being exposed as an alleged rapist eight years later. On the day when Mueller supposedly raped a woman in New York, the Washington Post reported that he had been seen entering the D.C. Superior Court to serve out his jury duty.

When confronted with this fact, Wohl suggested that Mueller was leaking news of his jury duty to the Post so he would have an alibi, thus making it easier to commit rape.

2.) Wohl and Burkman can't seem to agree how their client's name is spelled. At various points in the press conference, the two Trump supporters referred to their client by calling her "Carolyn," although reporters point out to them that they spelled her name "Carolyne" in documents they produced.

3.) Burkman defends Wohl's credentials by comparing him to one of history's greatest musicians. The 20-year-old Wohl, whose biggest achievement so far in life has been getting banned from trading for life by the National Futures Association as a teenager, has no experience in vetting and investigating rape cases.

Burkman, however, attested to Wohl's purported genius by calling him "a child prodigy who has eclipsed Mozart." A heckler then replied that, far from being a genius, Wohl isn't even allowed to open an eTrade account.

4.) Wohl accuses reporters of harassing his mother and sisters. When reporters this week tried to contact "Surefire Intelligence," a cut-out intelligence-gathering firm set up by Wohl as a pretext for eventually accusing Mueller of rape, the call redirected to his own mother's voicemail account.

Because Wohl apparently used a family voice plan as the cover for his fake company, his young sisters picked up phone calls from reporters on some occasions.

"You called underage teens over and over again!" an angry Wohl scolded reporters.

5.) Someone asks Wohl and Burkman, who were allegedly caught saying they would pay money to women if they would agree to make up stories of sexual misconduct by Mueller, if they're ready to go to federal prison.

The two men simply responded, "No."

Watch the entire press conference for yourself below.