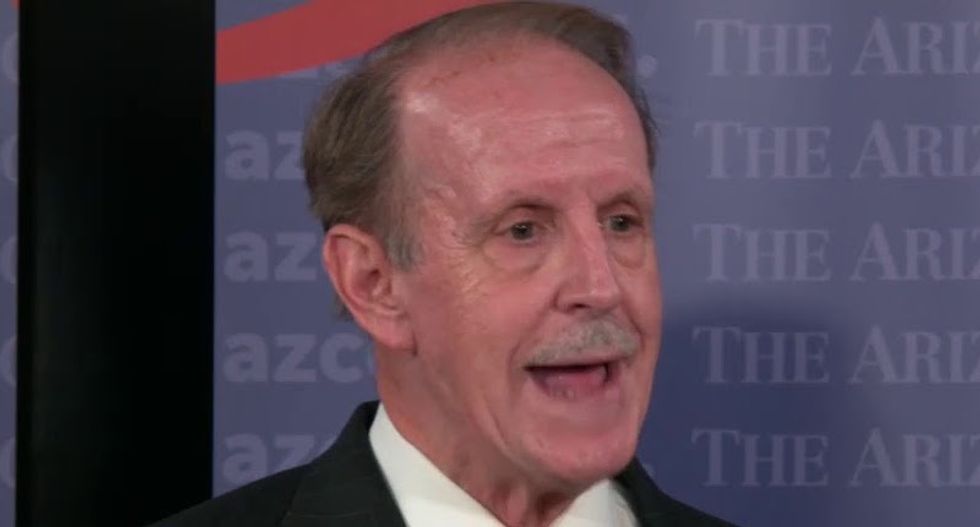 An Arizona Republican candidate for the state's top education post lost it on Twitter after his Democrat opponent declared victory.

The Phoenix New Times reported that GOP candidate Frank Riggs "seemed to fly off the handle" when local political consultant David Leibowitz made fun of the Republican for his "perennial campaigning."

Leibowitz took the jab at Riggs after Democrat Kathy Hoffman declared victory in the race in spite of it not being officially called.

The consultant jokingly said that he was "looking forward" to the GOP candidate running for the state's Corporation Commission — without knowing, the New Times noted, that Riggs did consider running for the commission in 2016.

In response, the candidate "exploded."

"Thanks for the tweet on #VeteransDay, you gutless punk," Riggs wrote in a since-deleted response to Liebowitz on Sunday. "Let me know if you ever wear the uniform, run for office, or serve in any capacity. All I did was protect the likes of you."

During the exchange, Riggs "roped in" attorney Thomas Galvin and Barrett Marson, two Twitter users "with whom he apparently has beef."

“Punk & coward. Couldn’t last one week in boot camp or police academy. Sorry Softie," the candidate said. "@ThomasGalvin @barrettmarson Does this shoe fit you too?”

"Dude. I don’t know you," Galvin replied. "Leave me out of this. Your behavior is reprehensible."

After Liebowitz suggested the men could settle their dispute "by Indian leg wrestling or a steel cage match" if the candidate weren't 68 years old, Riggs again took the bait.

"Anytime. Punk. You will be embarrassed, big time. Just message me. You & your pasty ilk are welcome to join me @ 5 am for one of my daily workouts," he wrote. "Can you do a pull-up yet?”

When the New Times reached out to Riggs for comment, the candidate deleted the tweets and then briefly deactivated his account before responding.

"Please do not contact me," he told the newspaper. "You are not authorized to use or share my mobile number. Please acknowledge receipt of this request."

You can see some of the deleted tweets below: