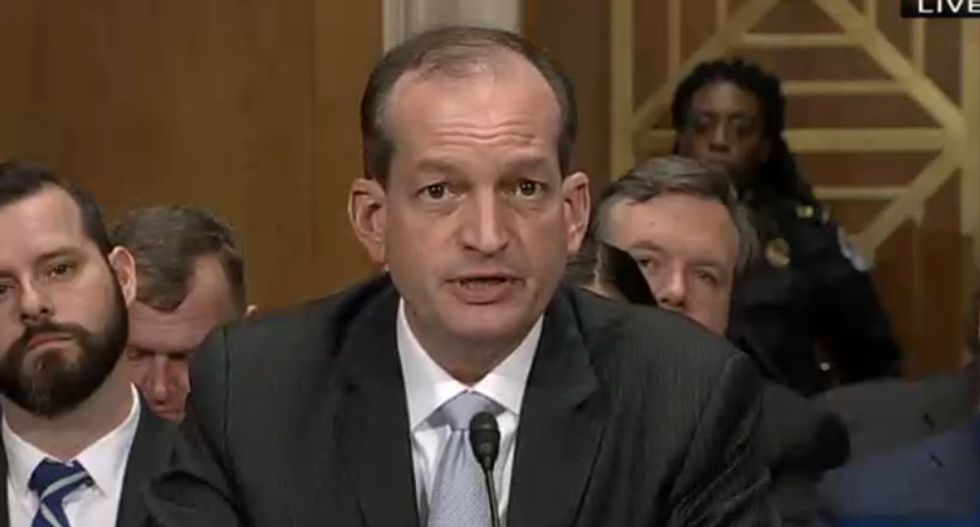 The 54-year-old Epstein -- friends with both Trump and former president Bill Clinton -- served just 13 months in county jail after pleading guilty to two prostitution-related charges in state court after his attorney made an agreement with then-prosecutor Alexander Acosta, reported the Miami Herald.

Acosta essentially shut down an ongoing FBI probe into Epstein's cult-like network of underage girls, which he recruited with the help of his victims and other teenage girls, after reaching a non-prosecution agreement with the Palm Beach billionaire's defense lawyer.

That attorney, Jay Lefkowitz, was a former Acosta colleague at Washington law firm of Kirkland & Ellis.

Lefkowitz and Acosta reached the agreement over a breakfast meeting in October 2007 at the Marriott in West Palm Beach, rather than the prosecutor's Miami offices, that allowed Epstein and four accomplices to receive immunity from all federal charges in exchange for guilty pleas to state charges.

The deal also granted immunity to "any potential co-conspirators," who were not identified -- but potentially referred to other rich and influential individuals who took part in sex parties involving underage girls at Epstein's homes and plane.

Acosta also agreed, in a possible violation of federal law, not to reveal the agreement to Epstein's victims.

That sealed agreement prevented any of the girls from showing up in court to stop its approval by a judge.

Epstein and his lead attorney, Jack Goldberger, declined to comment on the Herald's investigative report, and he has invoked his Fifth Amendment right against self-incrimination hundreds of times during two dozen lawsuits filed against him by his victims.

“I don’t think anyone has been told the truth about what Jeffrey Epstein did," said one of Epstein’s victims, Michelle Licata, now 30. “He ruined my life and a lot of girls’ lives. People need to know what he did and why he wasn’t prosecuted so it never happens again.”

The Palm Beach police detective who directed the investigation said Epstein's operation worked like a sexual pyramid scheme, and one of his victims told the newspaper that she sometimes brought girls to his mansion up to three times a day.

“We didn’t know where the victims would ever end,” said Michael Reiter, the retired Palm Beach police chief who oversaw the case.

Acosta also declined to comment on the Herald report.

The 49-year-old Acosta oversees the country's labor laws, including human trafficking, as Trump's secretary of labor, and he has been mentioned as a possible replacement for former Attorney General Jeff Sessions, who resigned under pressure earlier this month.