'This is over': CNN's Cuomo ends debate when conservative Steve Cortes tries to claim Antifa is worse than MAGABomber 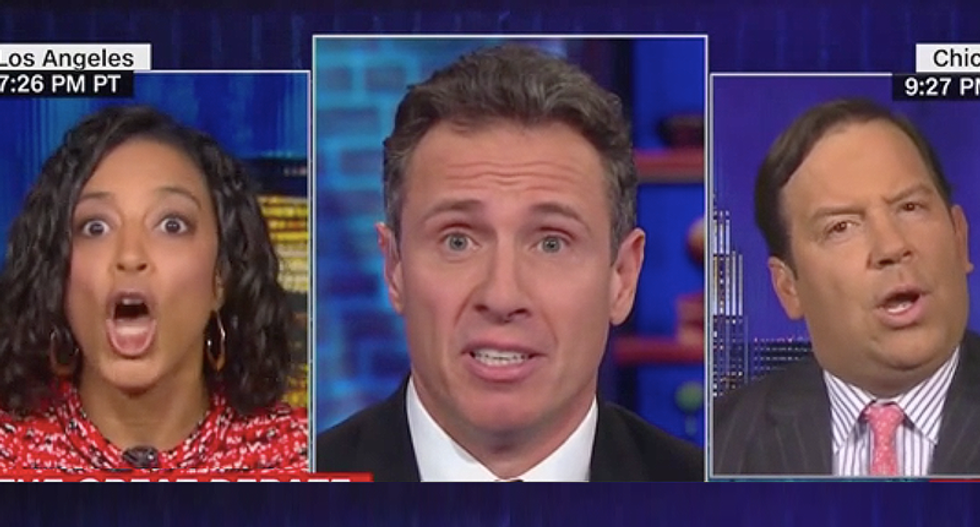 A CNN debate went completely off the rails when conservative Steve Cortes blamed Antifa and liberals for attacks on the media. The discussion was already getting testy as Democrat Angela Rye accused President Donald Trump of not caring about the assassination of Washington Post columnist Jamal Khashoggi.

The "pro-life" president made it clear Tuesday that financial resources of the Saudis trump the life of a reporter.

"I guess my issue is this. It's very simple. Donald Trump stood up before the American people and before the world to see today that there is no penalty whatsoever for killing an American journalist on foreign soil," Rye said.

"He's not an American," Cortes said.

"I'm sorry, but he works for an American publication!" Rye exclaimed.

Cortes attempted to make a case that the United States security interest isn't involved when an American is killed. He called the Khashoggi assassination not "even in the same universe."

"You regularly make judgments about the weight of an ally, and this is someone who was an ally to us. The problem is -- and this is where I was going initially -- is Donald Trump sees the press as his enemy," Rye said. "Donald Trump sees the press more of his enemy than the Saudis because he can put a dollar figure next to it. He is aligning himself with the Saudi prince, with the Saudis, because he sees and understands what it's like to be questioned. He sees questions and accountability as a tax. That is the real issue here."

Cortes stepped in it again when he tried to say that Trump hasn't done anything to attack the press.

"And all he has done is criticize the press. He has not done one thing to infringe upon the freedom of the press in this country," Cortes said.

She noted there are legal proceedings happening due to Acosta. Cortes dismissed it because it wasn't an attack on CNN.

"Don't do that to Jim," Rye said. She then noted that there are people on the network that get threats every day and Cortes should be more respectful.

"Angela, you know what? I do know there are people getting death threats. You know why? Because I happen to be one of them because the vitriol in this country -- it's because of the left. It's because of Antifa quite frankly," Cortes claimed.

That's when Cuomo lost it.

"Is that why that guy sent me a bomb? Is that why we have bombs sent here, because of Antifa?" Cuomo said.

"Are you saying that Antifa is not violent?" Cortes claimed.

"I'm saying that's not who sent the bomb to my office, let's take it up after Thanksgiving," Cuomo said. "This is over."

Watch the bonkers debate below: