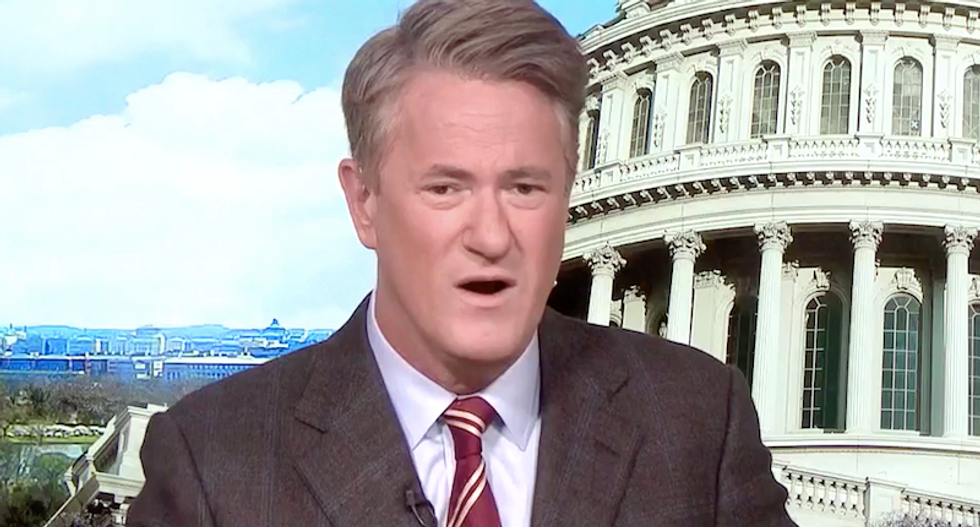 MSNBC's Joe Scarborough blasted Republicans for selling out their principles to defend President Donald Trump -- whom he's pretty sure won't even run for re-election.

The "Morning Joe" host said the president was publicly unraveling as the Russia probe encircles him and the extent of the Republican Party's midterm losses become more apparent day by day.

"As the scope and the scale of the midterms becomes clear, we're getting the chance to see the worst of Donald Trump," Scarborough said, "and we're watching his devastating impact on this country and on his Republican Party play out on vivid display."

"You know, regardless of what Republicans try to tell you, there was no split decision in the midterms," he continued. "Democrats keep racking up more House seats by the day, and they're going to end up winning the national popular congressional vote in the House by over 8 percent -- that's a historic rout. In fact, there's never been as big a win as the Democrats have had in the House in an off-term election."

Trump sided with Saudi Arabia in the murder of journalist Jamal Khashoggi, defended his daughter's use of personal email for government business and reportedly called for Justice Department investigations of Hillary Clinton and James Comey.

"Yesterday brought us a compendium of the bleakest elements of Donald Trump's immorality," Scarborough said.

The former GOP lawmaker challenged the party he left to do something about Trump's flagrant abuses.

"It's only going to get worse for Donald Trump," he said. "With Robert Mueller closing in, Trump has destroyed his own presidency and he is showing us his soul a little more every day."

"Don't show me your tweets, don't give me your speeches -- show me your courage," Scarborough continued. "Show me that you want to put your country, your party ahead of Donald Trump, but time is running out. For the sake of history and for the sake of the conservative moment, and one of the nation's two political parties."

He said things would only get worse for Republicans, and he again predicted that Trump would not seek re-election because he had never really wanted to be president in the first place.

"Good men and good women who want a future for the GOP need to stand up and speak out today," Scarborough said, "or their fate will be fully intertwined with this man who is crashing and burning right before their eyes. You think 2018 was bad, you ain't seen nothing yet."

Nikki Haley is moving closer to making her presidential campaign official. On Wednesday, supporters of the former South Carolina governor will get an email invitation to a Feb. 15 launch event in Charleston, at which she plans to announce her campaign, according to a person familiar with the plans but not authorized to speak publicly about them.

News of Haley's plans was first reported by The Post and Courier of Charleston.

One hope united many of the people streaming to see Pope Francis perform mass in DR Congo's capital on Wednesday -- that his presence could at last bring peace to the war-wracked east of the African country.

"The war will stop... thanks to the pope's prayer," said Eulalie Nzinga, 63, who got up at 4:00 am to make sure of a space at the airport in the capital Kinshasa, where up to a million people are tipped to attend Pope Francis's mass.