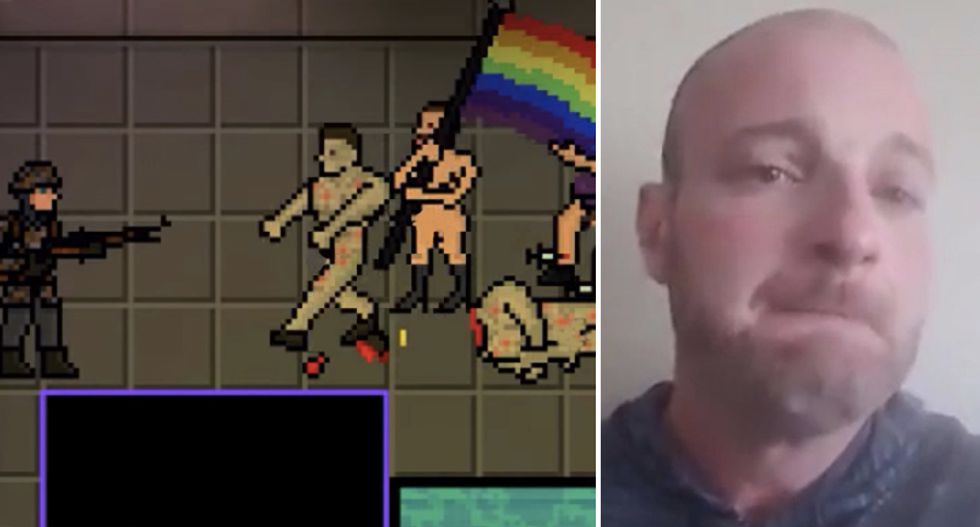 An Angry Goy II mission where a soldier kills gays in a nightclub (left) and a still from a Christopher Cantwell video (right). Images via screengrab.

"Angry Goy II is the season’s hit game for White males who have had it with Jewish bullshit," Cantwell wrote on the "free speech" social network Gab. The site is now back online after its old host dropped it when it was revealed that the alleged Pittsburgh synagogue shooter posted on it just before opening fire on the Tree of Life temple.

"Instead of taking out your frustrations on actual human beings, you can fight the mongrels and degenerates on your computer!" the Radical Agenda podcast creator wrote. "Use guns, knives, pepper spray, and more! Lay waste to wave after wave of sh*tdicks, sh*tskins, sh*tstains, and the k*kes they serve." 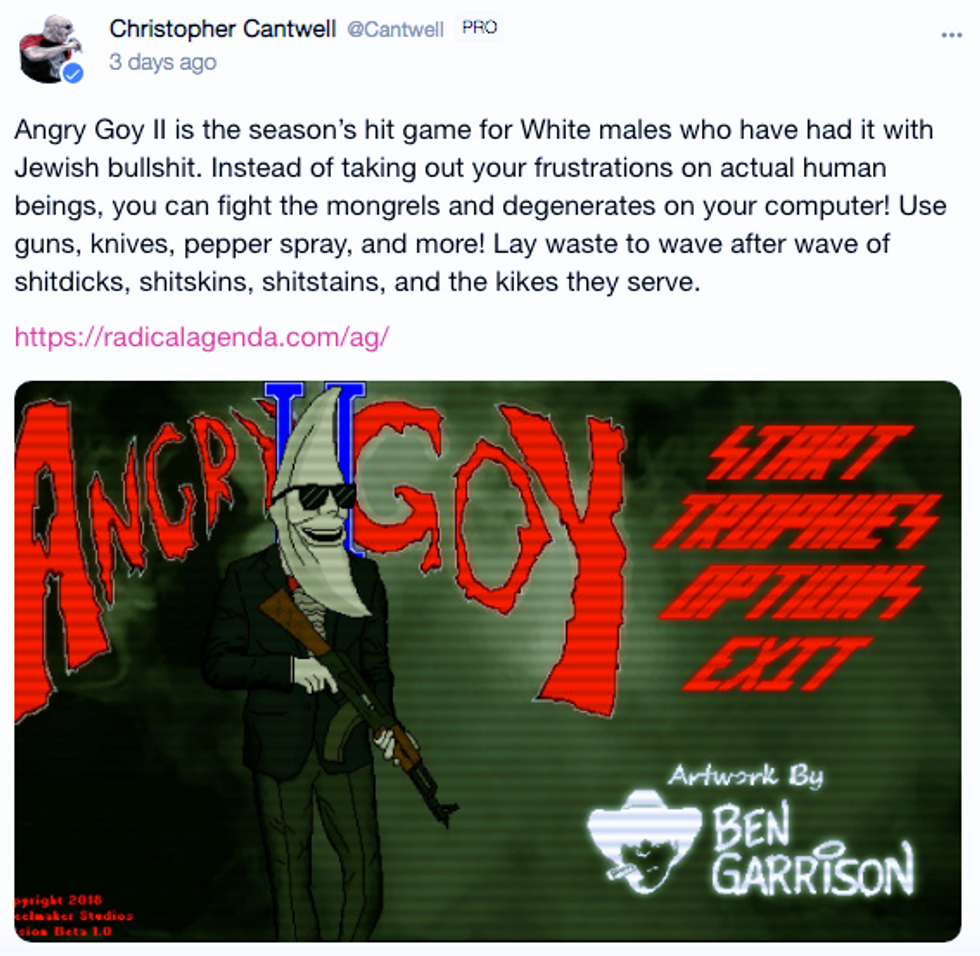 AWM noted that in one mission, players "break into a gay club, called the 'LGBTQ+ Agenda HQ,' and slaughter everyone inside." The level is "eerily reminiscent" of the Pulse nightclub shooting, the report noted, and the "art" outside the virtual gay club include pro-pedophilia posters that reference the defunct NAMBLA group.

"If a player fails to 'save the West,' they are treated to one of several “game over” sequences, including footage from the 2017 torture of a developmentally disabled white teen by several black assailants," AWM noted. "One sequence shows a woman identified as a 'Jewess' claiming that 'Europe has not yet learned to be multicultural.' Another shows a small, transgender child talking about how they are 'normal, just like everybody else.'"

The trailer for the first Angry Goy was so offensive, AWM noted, that YouTube pulled the video and issued a statement condemning hate speech.

As of press time, however, the trailer for Angry Goy II, released by "Wheel Maker Studios," is still online.

As an eyewitness, I can recall the events of January 6th in Washington as if they were yesterday. The crowds of angry loyalists storming the building while overwhelmed security guards gave way. The slavishly loyal vice-president who would, the president hoped, restore him to power. The crush of media that seemed confused, almost overwhelmed, by the crowd's fury. The waiter who announced that the bar had run out of drinks and would soon be closing…

Hold it! My old memory's playing tricks on me again. That wasn't the U.S. Capitol in January 2021. That was the Manila Hotel in the Philippines in July 1986. Still, the two events had enough similarities that perhaps I could be forgiven for mixing them up.