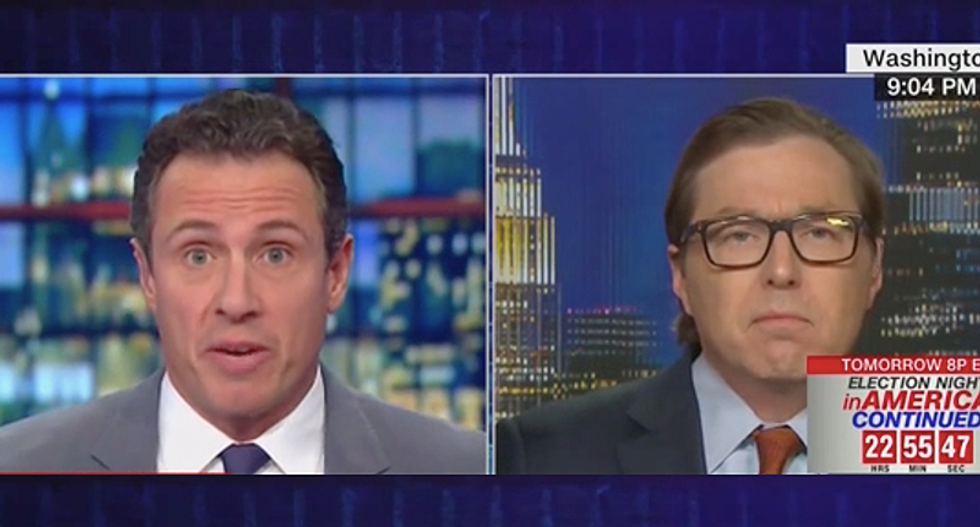 CNN's Chris Cuomo hammered Brad Todd, a senior advisor to the Rick Scott campaign as the man tried to claim there were illegal activities going on in Broward County, Florida.

Cuomo's interview came hours after a judge not only said that the governor had no proof of fraud but told him to dial down the rhetoric.

"So, why didn't governor Scott make a move on her and suspend her?" Cuomo asked after Snipe has served in her position for eight years.

Todd tried to claim that Scott simply didn't want to get involved with other elected officials. However, if Scott thinks she's committing fraud and has always been a questionable official, then it's unclear why he wouldn't protect Florida voters.

"You say that. Hold on a second. You say that and got some high ground given where she is and her past," Cuomo cut in. "No question. You're projecting the past onto the present. Before we put a halo on the governor's head, he came out with allegations of fraud, he didn't have a damn bit of proof. He told the Florida law enforcement people to look at it."

He noted that they went to the Republican Secretary of State's office, who found no fraud. Even Scott himself came to court armed with nothing more than claims instead of proof of fraud.

"The Florida law enforcement goes, they say, we have nothing to look at," Cuomo continued. "They reconfirm that this weekend. No halo for the governor on, he said there was fraud, it was trying to be stolen from him, that there was cheating. You can't prove any of that."

Todd tried to say that there were anti-fraud laws that must be followed to ensure things are done responsibly.

Todd cut in, saying they simply want to abide by the laws and they're concerned Broward County official is not.

Each opportunity Todd had to make his case, Cuomo shut him down with the perfect logic.