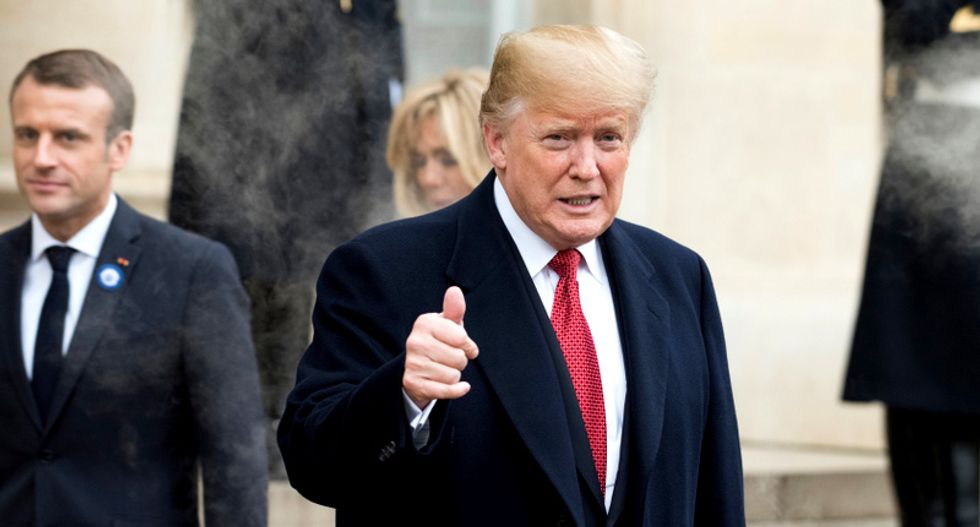 The President of United States of America Donald Trump at the Elysee Palace for an extended interview. (Frederic Legrand - COMEO / Shutterstock.com)

The transformation of the Republican party from a recognizable centre-right conservative political party to what it has become under Donald Trump began a half century ago.

It started with Richard Nixon’s “Southern Strategy” to break the old Democratic “solid South” by capturing white voters angered by the Civil Rights movement and the passage of the Civil Rights and Voting Rights Acts.

Two generations have passed, and the South has become solidly Republican. The economic conservatism of an earlier generation of Republicans has become more extreme, and is now fused with moral fervour by the promotion of culture wars in close alliance with the religious right.

Trump may have executed a hostile takeover of the GOP, but the party has been laying the groundwork for decades, and most of its leaders and base have passionately embraced him.

The reduction of regulations and of progressive income and corporate taxes by successive administrations from Ronald Reagan, both Bushes and Bill Clinton to Trump have contributed to a new gilded age with yawning income inequality and harsh attitudes about social legislation.

The courts, packed with reliably conservative justices, have aided and abetted a long-term assault by Republican state and federal administrations on labour unions, labour policies and legislation protecting worker rights and interests, leaving the United States with the lowest minimum wage among all advanced industrial nations.

So-called “fiscal conservatism” and the pursuit of balanced budgets through tax cuts have gutted infrastructure, public education and social services. It has also led to the unprecedented crisis of more than two trillion dollars in unpaid student debt, in many cases for programs never completed, that is a critical component of growing economic insecurity.

Republican administrations at the state and federal level have sought to reverse civil and voting rights laws, and in their place have pushed through measures to control and suppress the vote aimed clearly at racial and ethnic minorities and the poor.

All this is redolent of post-Reconstruction Jim Crow laws in the Old South that erased the effects of emancipation and post-Civil War rebuilding. The violent clashes over the removal of public memorials to “Confederate heroes” are a concrete reminder of that effort.

Voter suppression was reinforced by gerrymandering of congressional districts that detached parts of racially and ethnically diverse cities and attached them to largely white exurbia, offsetting the Republican inability to carry any of the country’s 198 metropolitan areas, centres of American cultural and economic dynamism, in recent presidential elections.

In a manner similar to that of right-wing nationalist governments in the increasingly turbulent decades from 1919 to 1939, between the two World Wars and now again in contemporary Europe, the Republicans have reacted to the global economic crisis, growing inequality, the insecurities of class and the growing global refugee crisis by scapegoating racial and ethnic minorities, migrants, women and sexual minorities struggling for equal rights.

These struggles are dismissed on moral grounds to appeal to the religious right. They’re portrayed as the political tools of liberal elites seeking to impose “political correctness” and give these groups undeserved special access to goods, services and positions.

An example is the attack on affirmative action programs for racial minorities in colleges and universities across the nation. And of Donald Trump’s demand to see Barack Obama’s grades at college and Harvard Law School.

Finally, the GOP has been actively involved with right-wing media in the politics of knowledge, creating a world of fake news and “alternative facts” that rejects reality. In this world, knowledge is a partisan construction.

Republicans like Newt Gingrich, Fox News and right-wing talk radio pundits have debased the level of political discourse with virulent personal attacks and lies about opponents, encouraging the development of extreme right media like Breitbart and the social media of racist rants and conspiracy fantasies. All of them feel legitimized and encouraged by Trump.

Although Trump with his crudity, vulgarity, boastful ignorance, racism and misogyny has proven more than the Republican establishment expected and could effectively control, they have been setting the stage for him for half a century.

Trump implemented their agenda of corporate deregulation and tax cuts for the rich, but moved further, opening the party to racists, white nationalists and neo-Nazis. Hate speech has morphed easily into violent acts of mailed bombs and a synagogue massacre.

At the same time, with his revival of the party’s old “America First” nationalism, he’s attacked free trade and the Western alliance, two of the foundations of Republican foreign policy, while toadying up to Russia’s Vladimir Putin and cultivating the friendships of vicious dictators.

The party of Abraham Lincoln, who dedicated his life so the “government of the people, by the people, and for the people” should not perish, has become under Donald Trump the greatest threat to American democracy since the Civil War.

He has released the demons from their dark corners. It won’t be easy to shut the doors again.