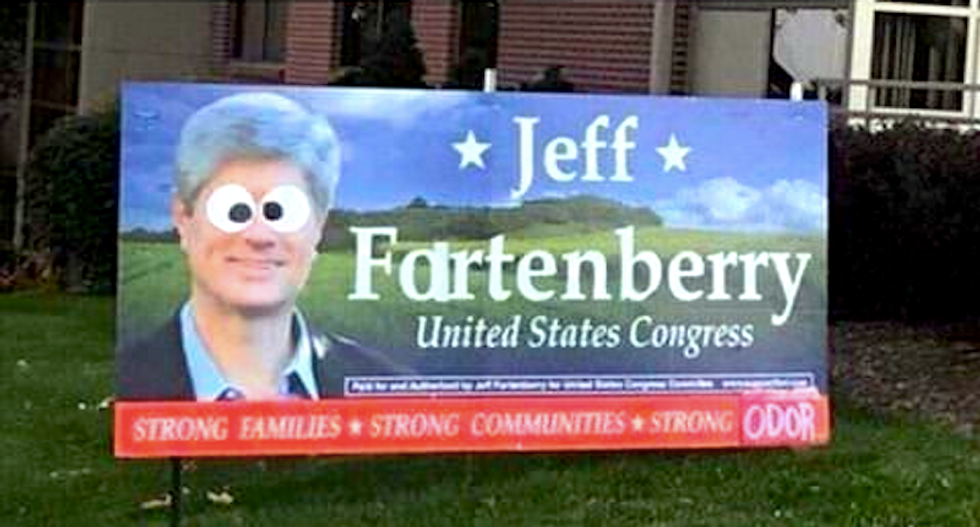 A Nebraska professor scrolled past a Facebook post mocking his congressman, Rep. Jeff Fortenberry (R-NE), with a sophomoric joke -- and the lawmaker's top aide threatened to get him fired for "liking" it.

The widely shared image showed a Fortenberry campaign sign defaced with googly eyes and mocking his name as "Fartenberry," and the GOP lawmaker described the vandalism as "political violence" in a tweet.

His chief of staff, Dr. William "Reyn" Archer III, then called at least one of the social media users amused by the photo posted by the group Seeing Red Nebraska, reported the Lincoln Journal Star.

“I know this is not high comedy,” said Ari Kohen, an associate professor of political science at the University of Nebraska-Lincoln. “It was Sunday, I was bored and got a laugh out of it. I clicked 'like' because I found it amusing.”

A Fortenberry campaign staffer sent a screenshot showing Kohen's interaction with the page to the lawmaker's office, and Archer called the professor to discuss it.

Archer then contacted the chair of the university's political science department when Kohen didn't immediately return his call, and he copied the chancellor and the interim chair of the College of Arts and Sciences on his email.

“The question is what the position of the department and university is regarding vandalism or worse violence, which we have seen in this political season,” Archer said, and requested to speak by phone.

A university spokeswoman declined to comment on the communication, and Kohen returned Archer's call late last week and tried to explain he was not promoting vandalism.

“It wasn’t clear at all what he wanted from me, if he wanted me to unlike it or retract it,” Kohen said. “He told me they could put this out publicly that I liked vandalism, and essentially, that that would be bad for me.”

Kohen took the legislative aide's comment as a threat, and he filed a complaint against Archer with the House Ethics Committee.

Archer denies making a threat, although Kohen gave a recording of the call to the ethics watchdog, and insisted the professor's social media activity was a "slippery slope to liking vandalism."

“When you are a teacher of political science, you have a higher requirement,” Archer said. “You can’t hide as a person who is a professor.”

But Kohen said Archer's apparent threat was a greater danger.

"To have people in this position who are ready and willing to abuse their authority like this," he said, "to bully people and push people around and threaten to call down retribution over something that maybe hurt somebody's feelings -- we're all poorer if that's what's happening in this country."