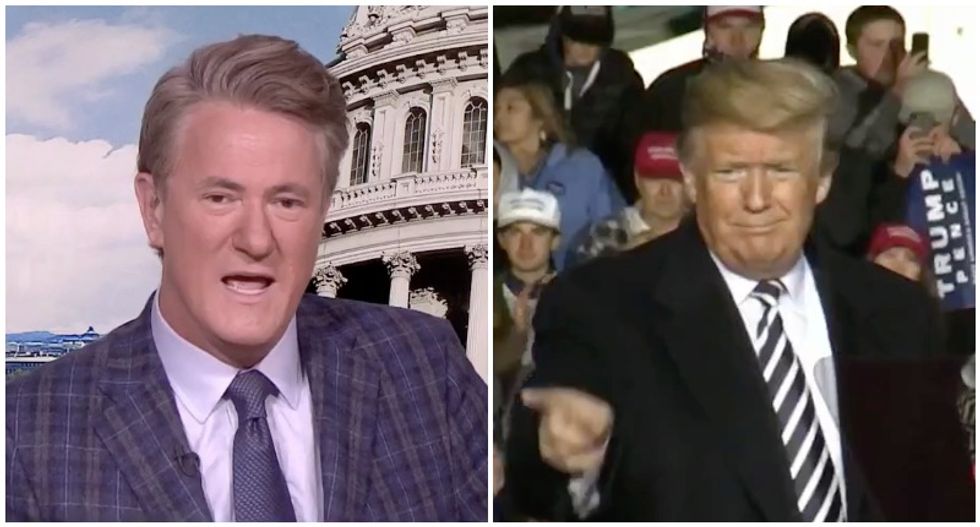 MSNBC's Joe Scarborough bashed President Donald Trump for placing himself at the center of the midterm elections -- and then scurrying away as the strategy appears to be backfiring.

The "Morning Joe" host said the president had "doubled down" on racist fear-mongering and unhinged campaign rallies, but he said polls show voters are flocking to Democratic candidates.

"America is starting to make a decision, and one poll after another poll -- whether you're talking about in Nevada, which is leaning Democratic, and Arizona, most polls are going Democratic," Scarborough said. "Even in Texas, where conservatives were mocking Beto O'Rourke a week or two ago, saying that he was a made-for-TV candidate and a loser, Beto down only three points now."

He said the trend lines are breaking against Republicans, and he said GOP pollsters know it's the president's fault.

"This race is getting tight," Scarborough said. "If you ask most Republicans on Capitol Hill why that is, why it is breaking the Democrats' way, they will tell you Donald Trump. He's playing front and center, he's playing to his 23, 25 percent, he's filling up arenas to make himself feel better."

Scarborough said the president is predictably starting to cast blame for a looming electoral loss.

"Guess what? He's start to go make excuses for why Republicans, why his party is going to lose," he said.

"Last night, he publicly complained -- can you believe this? -- he complained and whined that the murder of people inside a synagogue," Scarborough continued, "that shooting and the wounding of six police officers in Pittsburgh and 14 pipe bombs that were mailed to American leaders who just happen to be people that he's called the enemy of the people, last week, all those hurt Republicans' electoral chances, and he was whining about this last night."