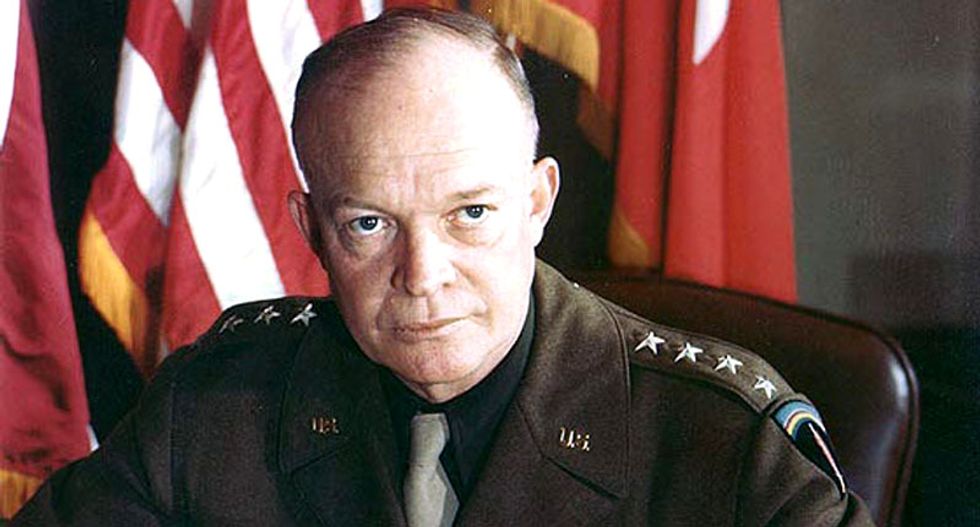 America has had 44 Presidents, and while all of them only came to know or be aware of a few Presidents in their lifetimes, an interesting concept is to wonder how every President in Donald Trump’s lifetime and a few others before his time, likely would react to him if they had met him (and some did).

Harry Truman, in whose time in the White House Donald Trump was born, clearly would have been willing to go on the campaign trail against Trump and the 21st century Republicans, as he did against Thomas E. Dewey and his party in the 1948 Presidential election campaign. Truman would have been ready to unleash harsh invective against Trump, would have called him some choice insulting names, and would have “given hell,” as his nickname historically reminds us (“Give ‘em hell, Harry”). He would have had no patience with his lack of knowledge of history, as Truman was a very well-read person in history, despite being the last President not to have attended or graduated college.

Dwight D. Eisenhower, under whom Donald Trump became a rebellious and obnoxious teenager, and was sent to military training school, would not have approved of Donald Trump’s abuse of the deferment process to avoid military service at a time when the military draft saw many soldiers go off to their demise, while Trump used bone spurs in his foot as an excuse to avoid service and then brag that his sex life was his Vietnam. Ike would have found Trump to be a strange character, someone who was ignorant and arrogant, cocky and obnoxious, and someone with no substance, and too willing to lie, and never admit faults, mistakes, or shortcomings. Ike would also be stunned by Trump’s infatuation with Russia and his constant undermining of NATO.

John F. Kennedy would likely see Donald Trump as a spoiled “rich kid,” who had no oratorical ability, no substance, all braggadocio, and egotistical. He would be appalled at Trump’s Russian connections and his lack of diplomacy and tact. Though Kennedy, in the parlance of the times, was a ladies man, he would be appalled that Trump had a public love life.

Lyndon B. Johnson would find Donald Trump a lightweight and would be furious that Trump has worked to undermine the Great Society programs on civil rights, federal involvement in education, Medicare and Medicaid, immigration reform, environmental and consumer reforms, and the War on Poverty, all of which LBJ took very seriously. He would find Trump a mediocre President, boastful but with no accomplishments worthy of respect or support. As a master legislator, he would pan Trump as a disaster in the making, unable to work with Congress to accomplish great goals to improve American society. LBJ would point out that he worked with Senate Minority Leader Everett Dirksen to gain bipartisan support on important legislation. LBJ would be alarmed at Trump’s affinity for authoritarian leaders.

Richard Nixon, the first President actually to meet Donald Trump (it was during Nixon’s retirement years in the late 1980s), apparently found Trump to be a young man of promise. But he no doubt would have been astounded at Trump’s ability to “get away” with so much corruption, and would be surprised that the level of corruption is already higher and more substantive so early in his presidency. As a master of foreign policy, Nixon would be stunned by Trump’s undiplomatic behavior and would be shocked at his basic ignorance of world affairs and issues. Nixon was a grind who studied hard before every meeting with a foreign leader; Trump celebrates his ignorance. In domestic affairs Trump has undermined three of the institutions Nixon helped establish: the Environmental Protection Agency, Consumer Product Safety Commission, and the National Oceanic and Atmospheric Administration.

Gerald Ford, with his long career in the House of Representatives, would be disturbed that a man with no government experience at all had become President. He would also have been outraged at Trump‘s willingness to destroy political opponents. He would, with the encouragement of his wife Betty have denounced Trump’s misogyny and nativism. He would have spoken out openly against the divisive and prejudiced appeals Trump resorts to regularly. Ford was Trump’s opposite. Ford was an affable unifier. That was one reason his nomination for vice president under the 25th Amendment in 1973 went through with ease. Both Democrats and Republicans trusted the man. Who trusts Trump?

Jimmy Carter has survived longer after his Presidency than any President in American history, and he has not been afraid to speak his mind about his successors, although always with diplomacy and tact. Carter has become more outspoken against Trump. A white Southerner sensitive to the scar racism has left on America, Carter has been appalled by Trump’s racism, nativism, and xenophobia and by Trump’s consorting with white supremacists. A profoundly religious man, Carter has expressed his alarm at the misuse of religion by rightwing evangelicals, who have shown their hypocrisy by supporting Trump despite his many flaws, from adultery to prevarication. Carter, for all of his faults, which have been discussed over the nearly 38 years since his presidency ended, is often referred to as an honest President who tried hard to avoid lying.

Ronald Reagan would be greatly disturbed by Trump’s lack of diplomacy and tact. And he would be astounded by Trump’s claim to be a conservative. He would be alarmed at the harm Trump has done to the Republican brand. Reagan would also be alarmed at the inability of Trump to see the dangers of authoritarianism in Russia and North Korea. It is likely that Reagan would have spoken up in criticism of the polarization that has developed, as Reagan understood the importance of working across the aisle, as he did with House Speaker Thomas “Tip” O’Neill during the 1980s on Social Security reform.

George H. W. Bush is very well aware of the dangers of Donald Trump, who has ridiculed him and his sons, George W. Bush, and Jeb Bush. He and his wife Barbara were appalled at the attacks unleashed on their younger son, who they had hoped might become President in 2017. Both refused to vote for Trump, and while Bush says little at his advanced age about particular issues, it is clear that he believes Trump has damaged the conservative heritage of the Republican Party, and is shocked by Trump’s dangerous foreign policy. Bush clearly believes Trump’s presidency has been a disaster. When Barbara Bush passed away in the spring of 2018, it was made clear that the Bush Family did not want the President to appear at the First Lady’s funeral.

Bill Clinton obviously is an intense critic of Donald Trump, after the nasty and bitter personal attacks on not only him, but also on First Lady Hillary Clinton in the 2016 Presidential election. Although the Clintons were guests at the marriage of Donald Trump and Melania in 2005, Bill Clinton despises the ground Trump walks on. Clinton is alarmed at Trump’s dictatorial fascist tendencies; Hillary Clinton has spoken out against Trump’s demagogic appeals. One can be sure that both Hillary and Bill Clinton will continue to speak out about the danger Trump poses to civility and stability.

George W. Bush, in defense of his father and brother, and with his own emphasis on civility and decency since his Presidency ended, has been limited in his public criticism of Donald Trump, but both he and First Lady Laura Bush have made no secret of their dismay over the deleterious effect Trump has had on the Republican Party and American politics. Particularly galling have been Trump’s steady barrage of attacks on Bush’s presidency. But Bush can be grateful to Trump in one respect. Bush’s often-criticized presidency looks golden by comparison to Trump’s.

Of course, Barack Obama has been Donald Trump’s major focus since Trump began his political campaign for President in June 2015. Already angered at Obama’s ridicule of him at the 2011 White House Correspondents Association Dinner, Trump began his campaign for the White House by peddling the “Birther” conspiracy theory that Obama was born in Kenya and was ineligible to be President. No person who’s won the Presidency has ever been so bluntly insulting to his predecessor as Trump has been with Obama. They have had only one meeting at the White House, two days after Trump’s surprising victory. Trump expressed his appreciation of Obama at the time but ever since has lied incessantly about him, and has set out to destroy the entire Obama legacy in domestic and foreign policy.

Trump has falsely claimed that the presently good economy only began on January 20, 2017. This has upset Obama, who played a key role in helping the country recover from the Great Recession. As many economists have observed, this isn’t so much Trump’s economy as Obama’s. Trump’s unwillingness to blast white supremacists and neo Nazis as he exploited nativism, Islamophobia, and misogyny, finally prompted Obama in September 2018 to launch an extraordinary attack on Trump’s presidency.

What might earlier Presidents have made of Donald Trump?

Thomas Jefferson and John Quincy Adams, probably our most intellectual Presidents, would be totally dismayed by Trump’s ignorance and lack of knowledge of history, science, and grammar. A very hard working President such as James K. Polk would be appalled at Trump’s laziness. Abraham Lincoln, to whom Trump often compares himself, would be very disturbed by Trump’s personality and divisiveness. The Great Emancipator would find it hard to believe that Trump, who pals around with crude racists, claims to be a Republican. Theodore Roosevelt would be infuriated at Trump’s attacks on the environment. Woodrow Wilson, the only president who earned a Ph. D., would find it hard to believe that such an ignorant, ill-informed man could be elected to the nation’s highest office. Franklin D. Roosevelt would be very upset by Trump’s campaign to undermine the New Deal that FDR worked so hard to establish.

Would any Presidents approve of Donald Trump’s personality, character, public persona, and policies? Possibly two—the two Andrews: Jackson and Johnson. Jackson would certainly appreciate Trump’s praise and would see in Trump another anti-elitist like himself. But the President closest to Trump is probably Johnson, who openly promoted racism, used foul language in public, was unable to cooperate with Congress, and divided the nation after the Civil War. When, following Lincoln’s assassination and Johnson took power, the country needed a calming voice; it got instead a President who seemed incapable of diplomacy or tact.

So with the exception of Andrew Jackson and Andrew Johnson, Donald Trump would be rejected by the men who have had the opportunity to serve as President. That should tell you something.