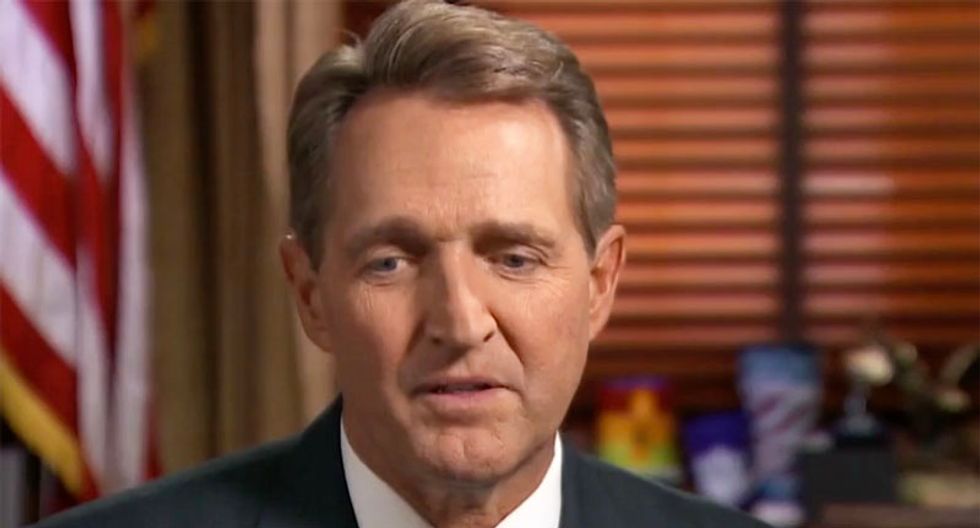 Flake has pledged to stage an epic protest against President Donald Trump and Senate Majority Leader Mitch McConnell (R-KY), who refused to allow a vote on a bill to protect Bob Mueller.

“So my commitment to not vote for judges before the committee or on the floor until we get this done stands,” Flake told reporters Wednesday.

“That’s not an idle threat,” CNN host Jake Tapper said when Flake announced his protest. He noted “if he votes against any of the 32 judges that come before the Senate floor, that makes it 50-50 and [Vice President] Mike Pence gets to be a tiebreaker.

That's exactly what happened Thursday, when Sen. Jim Inhofe (R-OK) was unable to vote, though he would have been a "yes" vote. Flake's "no" vote would have prevented Kobes from being confirmed. Instead, Flake withdrew his "no" vote so that the vote would be 49 to 49 and Pence would have to cast the tie-breaking vote.

“I said that Flake’s book had rhetorical power,” Senior wrote. “But looking back on it, it didn’t... In my initial review, I did note that Flake’s words wouldn’t be worth much if they weren’t matched by deeds."

“Jeff Flake’s book couldn’t even convince Jeff Flake,” she added. “As of this writing, he has voted with Trump 84 percent of the time.”

Kobes' nomination was opposed by several groups, including a rating of "Not Qualified" from the nonpartisan American Bar Association’s (“ABA”) Standing Committee on the Federal Judiciary.