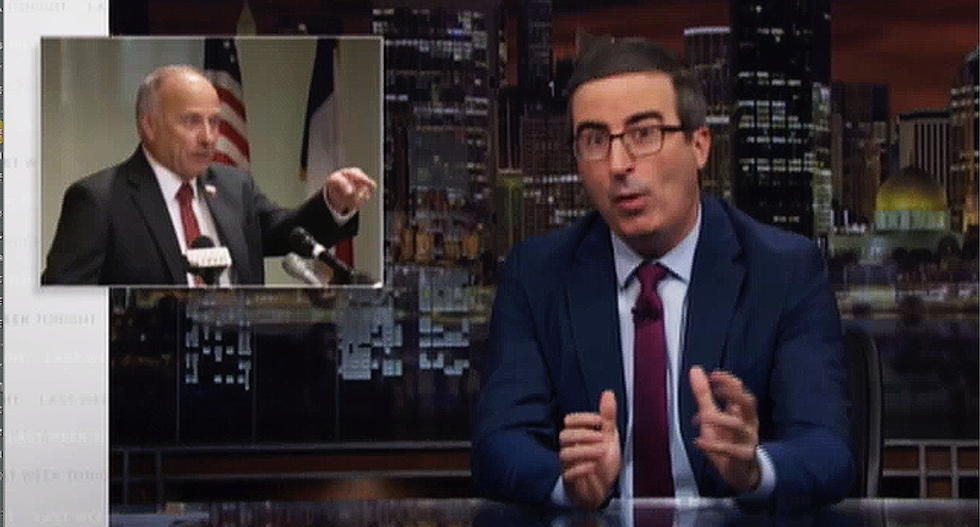 In his Sunday opener for "Last Week Tonight," host John Oliver issued an epic takedown of Rep. Steve King (R-IA), who has recently been called out by his own party for connections to white supremacy.

After a hilarious mocking of vaping Congressman Duncan Hunter, and his terrified bunny flying on a plane to Washington, D.C., Oliver pivoted to say that King has been a racist since the first day he was elected in Congress. For reasons passing in understanding, however, his party seemed fine with it.

"King has gotten into hot water for, among other things, meeting with an Austrian party founded by an SS officer in August, and when asked about that meeting, he did not take it well," Oliver said before playing the video of King having a ragegasm.

The reporter asked again for King to say whether or not he was a white supremacist. King pointed to the reporter, his face full of anger, and shouted: "STOP IT!"

Oliver then called out the corporate PACs that have supported King in the past, knowing his positions on issues and after he's said a slew of racist and hateful things. That said, Oliver wasn't surprised with the "shocking" slowness that AT&T responded because "picking up on clear signals isn't exactly their forte."

"Even neo-Nazi website Daily Stormer has said, and I quote, 'Steve King is basically an open white nationalist at this point,'" Oliver read.

Watch the clip from Oliver below: