At least 42 fatalities tallied in California's deadliest wildfire ever 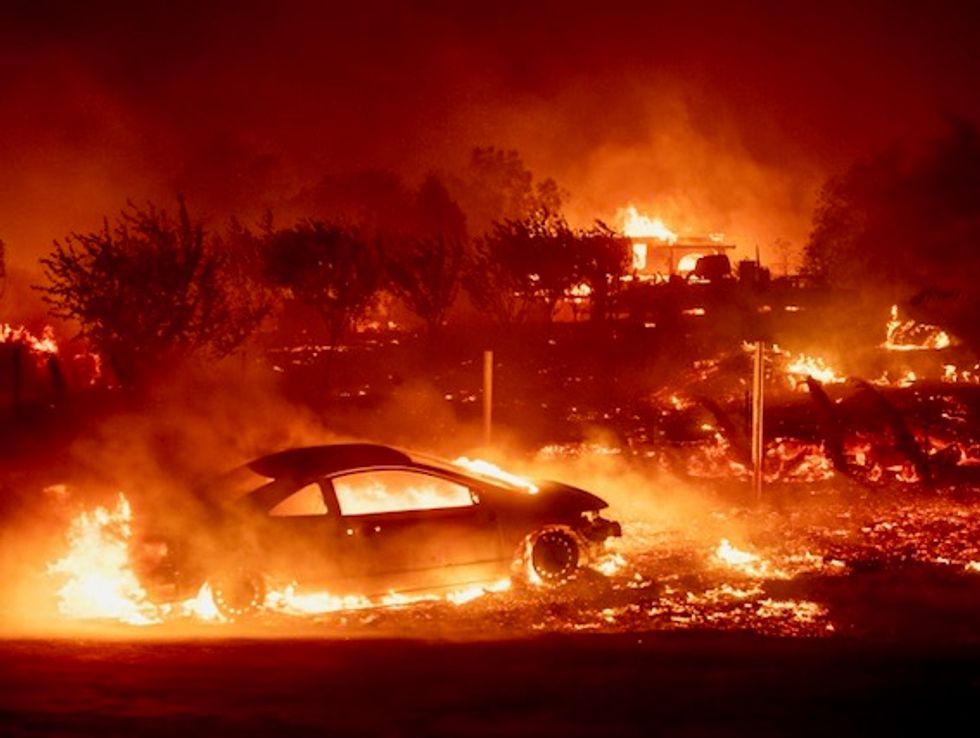 Search teams have recovered remains of 42 people killed by a fierce wildfire that largely incinerated the town of Paradise in northern California, marking the greatest loss of life from a wild land blaze in state history, authorities said on Monday.

The latest death toll, up from 29 tallied over the weekend, was announced by Butte County Sheriff Kory Honea at an evening news conference in the nearby city of Chico after authorities found the bodies of 13 more victims of the devastating blaze dubbed the Camp Fire.

The fire already ranked as the most destructive on record in California in terms of property losses, having consumed more than 7,100 homes and other structures since igniting on Thursday in Butte County’s Sierra foothills, about 175 miles (280 km) north of San Francisco.

Honea said 228 people were officially listed as missing in the disaster, but added that his office had received requests to check on the wellbeing of more than 1,500 people who had not been heard from by loved ones. Of those cases, 231 individuals had turned up safe, he said.

Authorities made clear, however, that they are bracing for the number of fatalities to climb.

In addition to 13 coroner-led recovery teams working in the fire zone, 150 search-and-recovery personnel were due to arrive on Tuesday, Honea said.

The sheriff said he also has requested three portable morgue teams from the U.S. military, a “disaster mortuary” crew and an unspecified number of cadaver dog units to assist in the search for human remains. Three groups of forensic anthropologists were also called in to help, he said.

The bulk of the destruction and loss of life occurred in and around the town of Paradise, where flames reduced most of the buildings to ash and rubble on Thursday night, just hours after the blaze erupted. Some 52,000 people remained under evacuation orders, the sheriff said.

The 42 confirmed fatalities marked the highest death toll in history from a single California wildfire, Honea said, far surpassing the previous record of 29 lives lost in 1933 from the Griffith Park blaze in Los Angeles.

Authorities reported two more people perished over the weekend in a separate blaze, dubbed the Woolsey Fire, that has destroyed 435 structures and displaced some 200,000 people in the mountains and foothills near Southern California’s Malibu coast, west of Los Angeles.

President Donald Trump, who drew criticism over the weekend for erroneously blaming the fires on “gross mismanagement” of forests, approved California Governor Jerry Brown’s request for a major disaster declaration on Monday. The measure hastens availability of federal emergency aid to fire-stricken regions of the state.

The fires have spread with an erratic intensity that has strained firefighting resources while catching many residents by surprise.

The bodies of some of the Camp Fire victims were found in burned-out wreckage of vehicles that were overrun by walls of fire as evacuees tried to flee, only to be trapped in deadly knots of traffic gridlock on Thursday night.

“It was very scary,” Mayor Jody Jones recounted of her family’s own harrowing escape from their home as fire raged all around them.

“It took a long time to get out. There was fire on both sides of the car. You could feel the heat coming in through the car,” she told CNN. Jones said her family is now living in their mobile home parked in a vacant lot.

More than 15,000 structures were threatened by the Camp Fire on Monday in an area so thick with smoke that visibility was reduced in some places to less than half a mile.

Perilous winds that stoked the fire through drought-parched brush and chaparral abated on Saturday, giving firefighters a chance to gain some ground against the flames.

The Woolsey Fire has blackened nearly 94,000 acres and was also 30 percent contained as of Monday night, according to the California Department of Forestry and Fire Protection (CalFire).

Winds of up to 40 miles per hour (64 km per hour) were expected to continue in Southern California through Tuesday, heightening the risk of fresh blazes ignited by scattered embers. CalFire said 57,000 structures were still in harm’s way from the Woolsey Fire.

Nearly 9,000 firefighters, many from out of state, were battling to suppress the Camp Fire, the Woolsey Fire and a handful of smaller Southern California blazes, backed by squadrons of water-dropping helicopters and airplane tankers.

Some evacuees in Malibu, a seaside community whose residents include a number of Hollywood celebrities, were allowed to return home but were left without power or cellphone service.

California has endured two of the worst wildfire seasons in its history over the past couple of years, a situation experts attribute in large part to prolonged drought across much of the Western United States.

Forty-six people died in a flurry of wind-driven wildfires that swept northern California’s wine country in October of last year, destroying some 8,900 homes and other structures. The worst of those blazes, dubbed the Tubbs Fire, was blamed for 22 of the deaths.