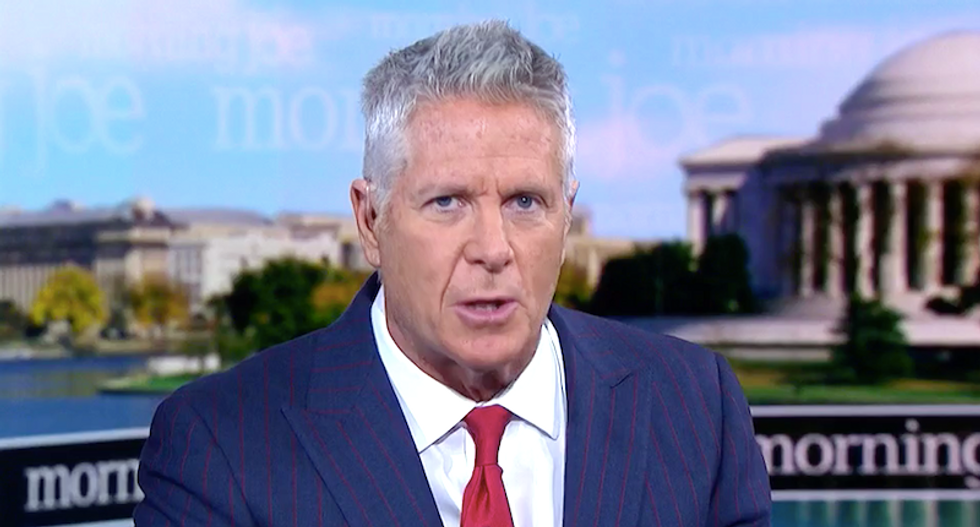 MSNBC's Donny Deutsch warns that President Donald Trump is going to completely melt down soon — and even Republicans won’t be able to ignore it.

Panelists on "Morning Joe" tried to analyze Trump's renewed attacks on special counsel Robert Mueller, saying the frenzied tweets and clumsy admissions reflect reporting that the president and his lawyers have met for more than five hours this week to discuss the Russia investigation.

"He's getting the questions from Mueller and freaking out," said co-host Mika Brzezinski. "I know one cannot make that connection, but one can certainly surmise that at the time the questions from the Mueller probe are coming into this White House, at the time Democrats have control and the president is finally being educated of the fact that there is nothing he can do when he is compelled to hand over his tax returns and answer questions."

"The president finally realizes for the first time in his life he is cornered and there is nowhere to go, and at the time that one might surmise his son is potentially on the list of those that might be indicted that this president is freaking out," she added.

MSNBC contributor Donny Deutsch predicted the meltdown would reach new depths as the walls continued to close in.

"The absurd moves he makes will get heightened," Deutsch said. "We're seeing a different guy now. Donald Trump a few weeks ago was scary, he was a Bond villain like Goldfinger, now he's more like Dr. Evil, where he comes on and instead of getting angry, you kind of almost chuckle. There's a patheticness to him that's starting to show that hasn't been there in the past."

Deutsch said the president has lost the control he has always craved, and he worried how that new reality would affect his behavior.

"It would be laughable if it wasn't so pathetic, frankly," Del Percio said. "To have a president of the United States spinning out of control and focused only on himself, and not on our country, at this point is devastating."

Scarborough pointed to Trump's admission that he appointed Matthew Whitaker as interim attorney general to interfere with the special counsel probe, and said the president's attempts to obstruct justice were obvious.

"He just walks into it," Scarborough said. "Maybe for Christmas this year, somebody can just get a stamp and, just make it easier for him, that says 'obstruction' on it and just stamp it on his forehead -- it's so obvious. You look at what he said to Lester Holt, what he told the Russian foreign minister, what he told the Russian ambassador of the United States about the firing of (James) Comey. He obstructs in the light of day."