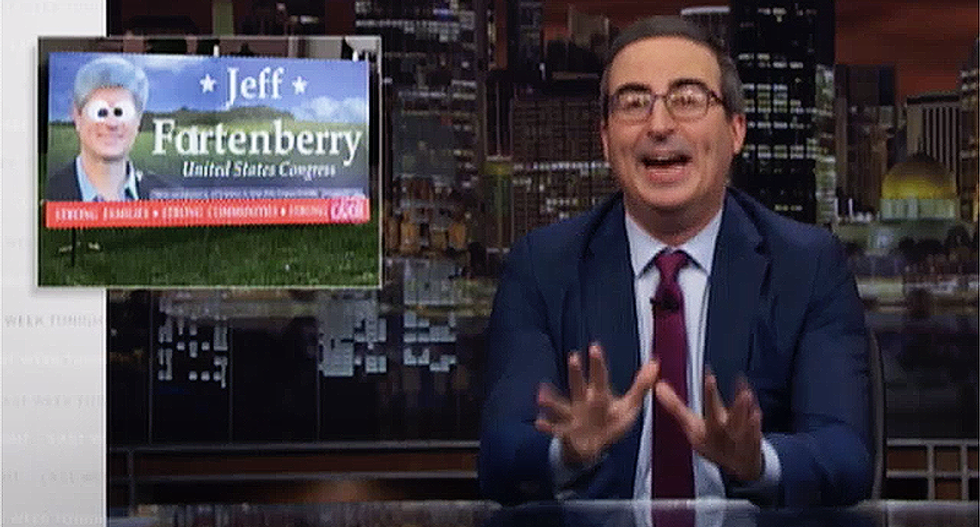 When someone put googly eyes on a billboard for Rep. Jeff Fortenberry's campaign and changed his name to "Fartenberry," the candidate and his campaign seemed to have a mini-meltdown.

It appears that his chief of staff for Fortenberry called Professor Ari Kohen at the University of Nebraska-Lincoln and threatened him after he "liked" a photo of the billboard on Facebook.

The chief of staff claimed that Kohen was liking "vandalism" by liking the Facebook photo.

"I'm liking a photo," the professor said, chuckling, presumably at the absurdity.

"If someone were liking something with blackface would that be acceptable?" the chief asked.

At that point Oliver cut from the recording of the exchange to tell the audience, "blackface is not acceptable." When he did, confetti fell and the word "WINNER" displayed across the screen. A fake version of the NBC peacock came out on stage and Oliver announced that he was clearly the winner of Meghan Kelly's job.

Oliver then concocted a fake explanation that liking that photo is similar to liking a photo in blackface because there is a tradition of putting googly eyes on someone with gastric distress.

The HBO host then returned to the recording between the chief of staff where the Kohen tried to dissuade him from going public with an attack on Kohen because, "I think it'd be a terrible idea for you, if I'm being perfectly honest." Kohen was likely trying to explain that raising this issue and making it a huge attack risks turning it into a national story that might garner attention on shows like John Oliver's.

"The optics of this are terrible," Kohen tried to explain to Fortenberry's campaign chief of staff, who's clearly never heard of the "Streisand Effect."

Despite the hilarity, Oliver argued that in an election with a "vaping douche" like Duncan Hunter, "someone so racist that butter had to weight in, this might actually be the best optics that you can possibly get."

Watch the segment below starting at the 4:53 mark and Professor Ari Kohen's recording under that:

But I recorded our entire 53 minute conversation and you can listen to his specific threat and the few minutes that… https://t.co/TC0ofEeZip
— Ari Kohen (@Ari Kohen)1541079230.0