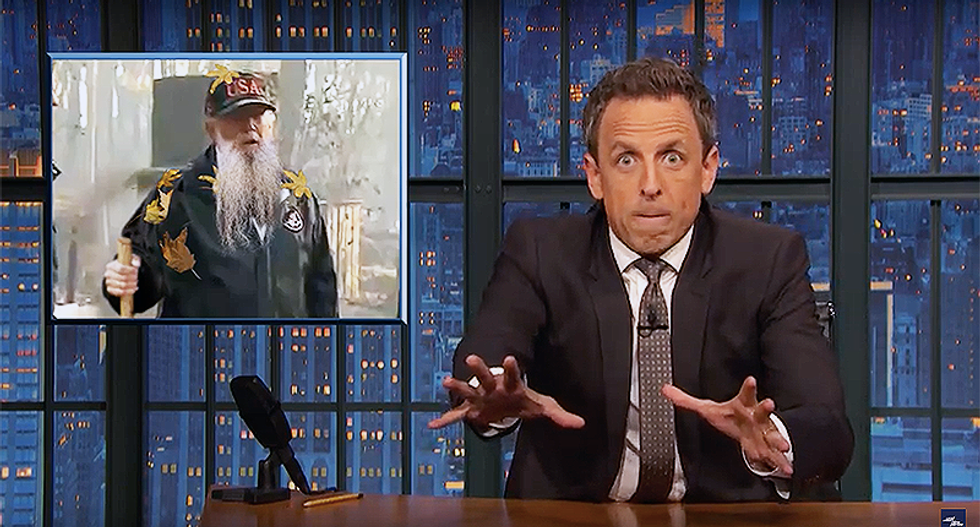 On Monday, Late Night host Seth Meyers mocked President Donald Trump for saying that California wildfires could have been prevented if "people raked the floor of the forest."

Meyers detailed that this isn't the first time Trump has embarrassed America using false information about other countries.

The first bizarre comment came when Trump made a campaign speech saying "you know what happened in Sweden." It turns out, no one, including Swedish police, knew what happened or what he was even talking about. The internet, including the embassy, roasted him for it.

Then, the president invented a story about Germany during his speech to the United Nations.

"Germany will become totally independent on Russian energy if it does not immediately change course," Trump said.

Even the German delegation laughed at him.

The president then invented a friend named "Jim," who refuses to go to Paris anymore due to immigrants. Jim was never found, and Meyers wondered if Trump met a mime in Paris and misinterpreted what the mime said.

The latest came when Trump said that he got the idea to rake the floors of the forest because that's how they handle forest fires in Finland.

“I mentioned [to] him that Finland is a land covered by forests and we also have a good monitoring system and network,” Niinistö said.

Meyers joked that Trump looked like someone who lives in a trailer park while he was talking about the forest fires on live TV.

"If you didn't know Trump was president, you would think he was some weirdo who walked up to them from some trailers in the wood," Meyers joked.

Meyers added, "He should be covered in leaves and holding a walking stick. 'You gotta rake the floors.'"