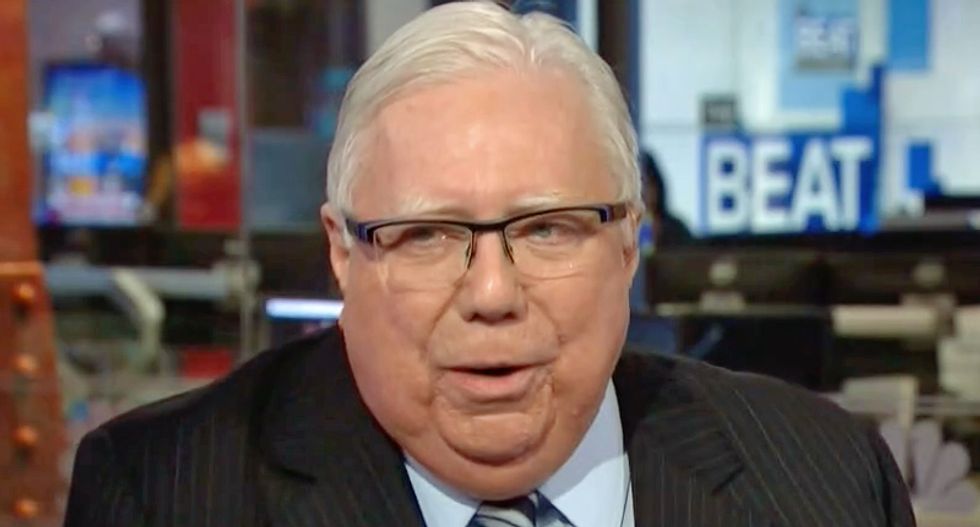 Conspiracy theorist Jerome Corsi sat down with MSNBC's Ari Melber for an extended, 20-minute interview about his role in the Wikileaks release of hacked emails under investigation by special counsel Robert Mueller.

Corsi recounted what happened after he gave his excuse to the special prosecutors for misleading them.

"They didn't believe it," he noted. "Jeannie Rhee, one of the prosecutors, said, 'Dr. Corsi, you are asking us to believe that on an extended international flight with your wife for an anniversary, you had divine intervention and God inspired your mind and told you [Julian] Assange has Podesta's emails, he's going to dump them in October and they'll be dumped in a serial fashion? Is that what you're saying?'"

"I said, 'I guess that's about what I'm saying," he recounted.

"Did they give the impression they were upset with you?" Melber asked. "Did they raise their voice?"

"Yes, stormed out of the room," Corsi replied.

Corsi also said, "I’m not counting on Donald Trump for anything — including a pardon."

"But I didn’t ask you about a pardon," Melber noted.

"I’m not asking for a pardon and I’m not anticipating a pardon," Corsi claimed later in the interview.

"I don’t think I lied," Corsi explained. "In your terms, it was a lie, in my terms it was politics."

A Louisiana judge who gained international notoriety for ordering a woman to give up custody of her daughter to her alleged rapist and then pay child support is again facing widespread criticism in another child custody case.

Judge Jeffrey Cashe ordered a 7-year-old girl to attend unsupervised visits with her mother at a home where she alleged two men had sexually abused her, and her father Brett Schliegelmeyer said the Department of Children and Family Services shared his confusion and concern, reported WBRZ-TV.