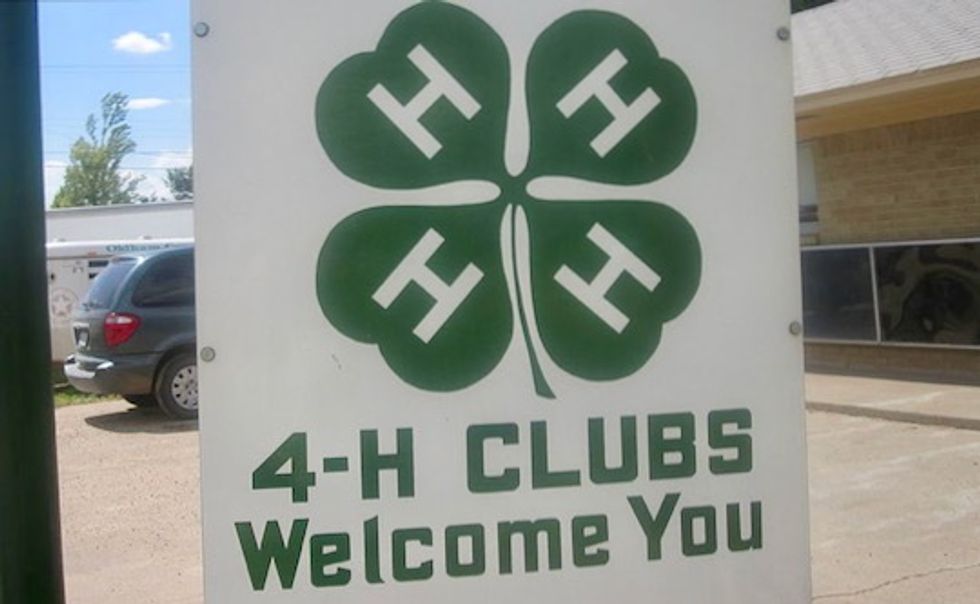 Image by Billy Hathorn via Wikimedia

The Trump administration has secretly forced a century-old international youth organization to rescind its LGBTQ-supportive policy in a move that also led to the ouster of one of the group's top state leaders.

4-H is an international organization with over 6 million members in the United States. While technically an independent group, in America it is congressionally authorized, and administered by the U.S. Dept. of Agriculture (USDA).

That alliance appears to be becoming problematic.

According to an exclusive report by The Des Moines Register, the "Trump administration pushed the national 4-H youth organization to withdraw a controversial policy welcoming LGBT members."

U.S. Secretary of Agriculture Sonny Perdue's chief of staff requested the policy be rescinded just days after it had been posted. The director of the USDA's National Institute of Food and Agriculture, the department that administers the 4-H programs, contacted Iowa's and New York's top 4-H leaders. In an "urgent" email, they asked that the policy be pulled off their websites.

The LGBT guidance was designed "to ensure LGBT members felt protected by their local 4-H program. The document and their attempts to broaden membership in the LGBT community was a smaller part of a larger, multi-year effort to modernize the federally authorized group," The Register notes.

The decision to rescind the policy "set off a firestorm this spring that engulfed 4-H programs in at least eight states — including Iowa, Idaho, Wisconsin, California, Oregon, Nevada, Colorado, Virginia and New York."

For whatever reason it also "precipitated the firing of Iowa 4-H director John-Paul Chaisson-Cárdenas, a fierce advocate of the LGBT policy."

Some "4-H volunteers, leaders and former members, called the policy a 'fascist push to redefine humanity' and characterized transgender children as 'horrendous' and 'sinful,'" according to The Register.

The guidance was posted by many organizations, including Washington State University. It's unclear why the Christian right chose to go ballistic over the document, which includes phrases like:

"The 4-H Program is committed to being inclusive and welcoming of all forms of diversity."

"The USDA prohibits discrimination of any individual based on gender identity, gender expression, sexual orientation, and/or sex."

"4-H shall not segregate or otherwise distinguish individuals on the basis of their sex, gender identity, gender expression, or sexual orientation, in any 4-H activities or the application of any 4-H rule."