US complicity in the Saudi-led genocide in Yemen spans Obama, Trump administrations 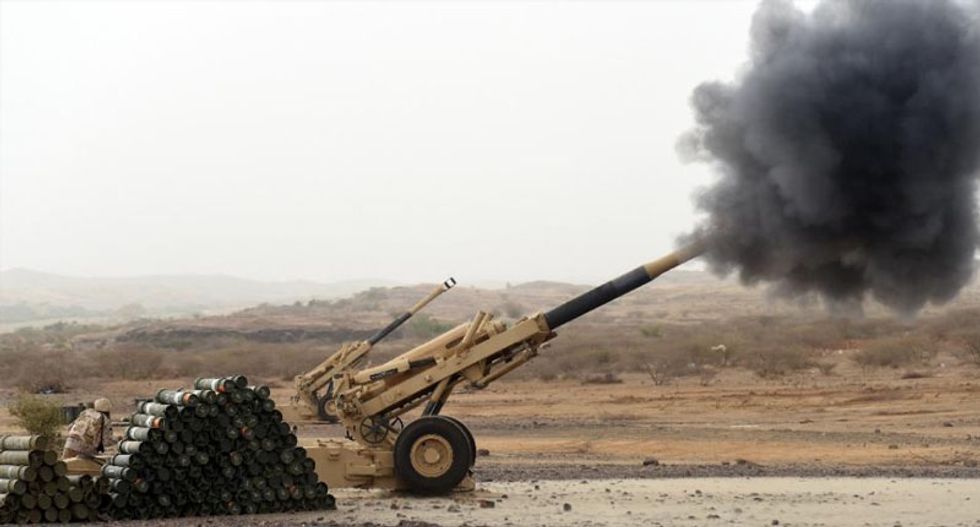 A Saudi army artillery cannon fires shells towards Yemen from a post close to the Saudi-Yemeni border, in southwestern Saudi Arabia, on April 13, 2015 (AFP Photo/Fayez Nureldine)

A Saudi-led coalition of states has been aggressively bombing Yemen and imposing an air and naval blockade of its ports for more than three years, leading U.N. Secretary-General Antonio Guterres to describe Yemen as “the world’s worst humanitarian crisis.”

Guterres put the crisis in stark perspective, emphasizing the near complete lack of security for the Yemeni people. More than 22 million people out of a total population of 28 million are in need of humanitarian aid and protection. Eighteen million people lack reliable access to food; 8.4 million people “do not know how they will obtain their next meal.”

As a scholar of genocide and human rights, I believe the destruction brought about by these attacks combined with the blockade amounts to genocide.

Based on my research, to be published in an upcoming issue of Third World Quarterly, I believe the coalition would not be capable of committing this crime without the material and logistical support of both the Obama and Trump administrations.

Yemen has been gripped by a civil war since 2015, pitting the Shia Houthi movement – which has fought for centuries for control of parts of Yemen – against a government backed by Sunni Saudi Arabia. Because of these religious differences, it would be easy to recast what is largely a political conflict in Yemen as a sectarian one.

That characterization fits Saudi and U.S. assertions that the Houthis are controlled by Shiite Iran, a claim that has not gone uncontested. Both the Saudis and the U.S. are hostile to Iran, so U.S. support of Saudia Arabia in Yemen represents what U.S. administrations have said are strategic interests in the region.

Besides Saudi Arabia, the coalition attacking Yemen includes the United Arab Emirates, Egypt, Morocco, Jordan, Sudan, Kuwait and Bahrain. Qatar was part of the coalition but is no longer.

During the first three years of “Operation Decisive Storm,” later renamed “Operation Renewal of Hope,” 16,749 coalition air attacks in Yemen were documented by the Yemen Data Project (YDP), which describes itself as an “independent data collection project aimed at collecting and disseminating data on the conduct of the war in Yemen.”

Based on the information available to it using open sources, YDP reports that two-thirds of the coalition’s bombing attacks have been against non-military and unknown targets. The coalition isn’t accidentally attacking civilians and civilian infrastructure – it’s doing it deliberately.

That’s evident from the kind – and volume – of civilian targets documented. They include places that are generally protected against attack even under the lax rules of international humanitarian law: Residential areas, vehicles, marketplaces and mosques as well as boats, social gatherings and camps for internally displaced persons.

Because of the role it plays in movement of people, food and medicine, Yemen’s transportation infrastructure is especially important. Airports, ports, bridges and roads have all been repeatedly attacked.

Yemen’s economic infrastructure – farms, private businesses and factories, oil and gas facilities, water and electricity lines and food storage – have also been hit. And the coalition has targeted and destroyed schools and medical facilities, too.

Finally, Yemen’s cultural heritage has been attacked. In all, at least 78 cultural sites have been damaged or destroyed, including archaeological sites, museums, mosques, churches and tombs, as well as numerous other monuments and residences that have great historical and cultural significance.

How to make a crisis

The attacks aren’t the only way the coalition is creating a massive humanitarian crisis.

The air and naval blockade, in effect since March 2015, “is essentially using the threat of starvation as a bargaining tool and an instrument of war,” according to the U.N. panel of experts on Yemen.

The blockade stops and inspects vessels seeking entry to Yemen’s ports. That allows the coalition to regulate and restrict Yemenis’ access to food, fuel, medical supplies and humanitarian aid.

In his analysis of the blockade’s legality, Dutch military scholar Martin Fink writes that the blockade means “massive time delays and uncertainty on what products would be allowed to enter.”

Despite U.N. efforts to alleviate some of the worst delays, imports are often held up for a long time. In some cases, food that makes it through the blockade has already spoiled, if entry is not denied altogether.

In some ways, the humanitarian crisis in Yemen is unprecedented and can be tied directly to the conflict. As the World Bank notes, “Yemen’s very difficult economic challenges before the current conflict cannot be compared to the intensely critical situation the country is facing today.”

The failing security for the people of Yemen has been compounded by a failing health system. The World Health Organization reported in September 2017 that only 45 percent of health facilities in Yemen were functional.

As Secretary-General Guterres put it, “Treatable illnesses become a death sentence when local health services are suspended and it is impossible to travel outside the country.”

As of February 2018, according to the Office of the High Commissioner for Human Rights, the coalition had killed 6,000 people in airstrikes and wounded nearly 10,000 more.

Yet, according to the OHCHR report, these counts are conservative. Tens of thousands of Yemenis have also died from causes related to the war. According to Save the Children, an estimated 85,000 children under five may have died since 2015, with more than 50,000 child deaths in 2017 alone from hunger and related causes.

Coalition actions in Yemen amount to nothing short of what Raphael Lemkin, the individual who coined the term “genocide,” referred to as a “synchronized attack on different aspects of life.”

The coalition’s genocide in Yemen would not be possible without the complicity of the U.S. This has been a bipartisan presidential effort, covering both the Obama and Trump administrations.

U.S. arms are being used to kill Yemenis and destroy their country. In 2016, well after the coalition began its genocidal assault on Yemen, four of the top five recipients of U.S. arms sales were members of the coalition.

The U.S. has also provided the coalition with logistical support, including mid-air refueling, targeting advice and support, intelligence, expedited munitions resupply and maintenance.

Other than the sale of arms, perhaps the most significant contribution to the coalition’s ability to commit genocide in Yemen has been the provision of fuel and mid-air refueling of coalition warplanes, which was halted in early November 2018. By the middle of 2017, the U.S. had delivered over 67 million pounds of fuel to the coalition and refueled coalition aircraft more than 9,000 times.

As a genocide scholar, I believe that under international law, the U.S. shares responsibility with the coalition for genocide in Yemen.

What does this mean? It means that the U.S. must cease and desist all activities that facilitate genocide in Yemen. This would include stopping all sales of weapons and ending logistical support for coalition action.

In an ideal world, one in which all states are equally subjects before international law, the U.S. would also seek an advisory opinion from the International Court of Justice regarding what restitution it owes the people of Yemen for its role in the coalition’s genocide.

Similarly, the U.S. would request an International Criminal Court investigation into individual culpability of U.S. officials in both the Obama and Trump administrations for their role in facilitating the crimes committed in Yemen.

Of course, this is not an ideal world.

All that is left, then, is for the people of the U.S. to hold their own to account for the crimes committed in their names.