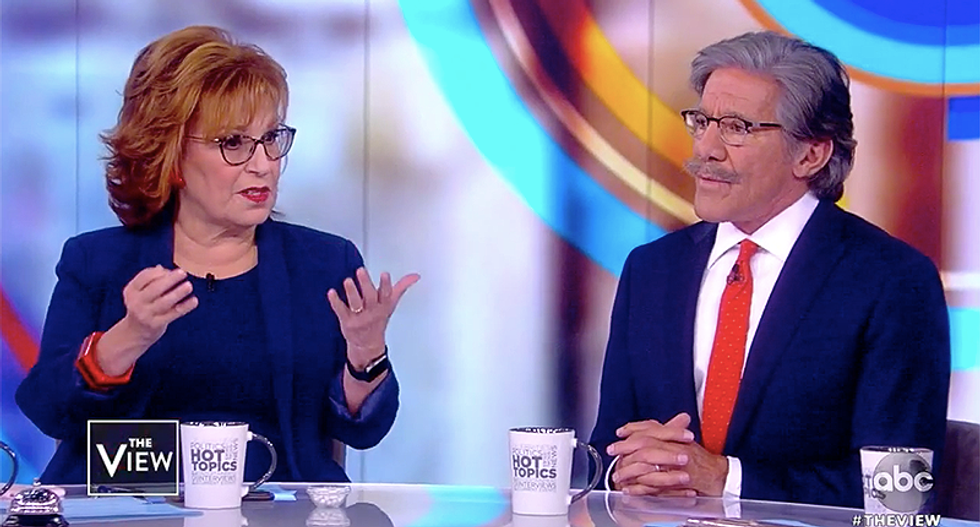 Fox News commentator Geraldo Rivera alleged that the bombs sent to Democrats and CNN were likely a false flag and a fake attempt to gin up sympathy for the left. The reality was quickly revealed that “MAGABomber” Cesar Sayoc was the suspect behind the bombs and he was apparently motivated by President Donald Trump’s attacks on specific Democrats.

When he was faced with the hosts of "The View," Rivera admitted he became a "right-wing lunatic" with his conspiracy theory. He then attempted to blame it on a "brain fart," but co-host Joy Behar wasn't having it.

"I had just spoken to a couple of cops, experts in demolition and bomb experts, who told me that the devices were not viable," Rivera claimed. "So, I said 'Why would a Trump-lover send out fake bombs guaranteed to hurt the president in the lead-up to the mid-terms.' It just seemed cartoonish to me. Who thought driving around in a van with Hillary Clinton's picture with a crosshair, Barack Obama's picture--"

Police noted that while the pipe bombs were crudely designed, they were still viable IEDs that would have detonated "if pressure or heat was applied," according to the criminal complaint.

"But we didn't know that before," Behar noted.

"It just seemed too pat -- I never should have said it. I shouldn't have opined when I didn't know," he then went on to admit it was worse than Al Capone's vault.

Sunny Hostin wanted to know how someone could have a van plastered with Donald Trump photos and Donald Trump sayings as well as Democrats in the crosshairs and somehow the president still isn't linked with inciting violence.

Rivera explained that President Barack Obama wasn't blamed for things like Sandy Hook nor was Bernie Sanders blamed when one of his supporters shot Rep. Steve Scalise (R-LA).

"This guy had a tricked-out Trump van!" Hostin exclaimed.

"No, no, no, no," Behar shot back. "Obama never said the things Trump said. Not even once, Geraldo, come on!"

"I disagree. If we start blaming the speech rather than the perpetrator --" Rivera began.

Meghan McCain cut him off noting that she didn't blame Sanders for the Scalise shooting.

"Can I just make a point," she began. "The reason you don't blame Bernie is -- because Bernie never encouraged anybody to go out and beat anybody up or hurt anybody or do anything. And, so, I think the difference, Geraldo, at least in my mind, is the consistency of this man's rhetoric starting with Mexicans are rapists, starting with, you know, Islamic people were jumping up and down as the buildings fell. When you do this consistently, and it's every week, I think there's a difference between what happens on somebody's watch and what happens because you have whipped up folks and they don't -- in their fervour, some folks who may or may not have mental issues, you don't want to whip people up because you don't know who you're whipping up."