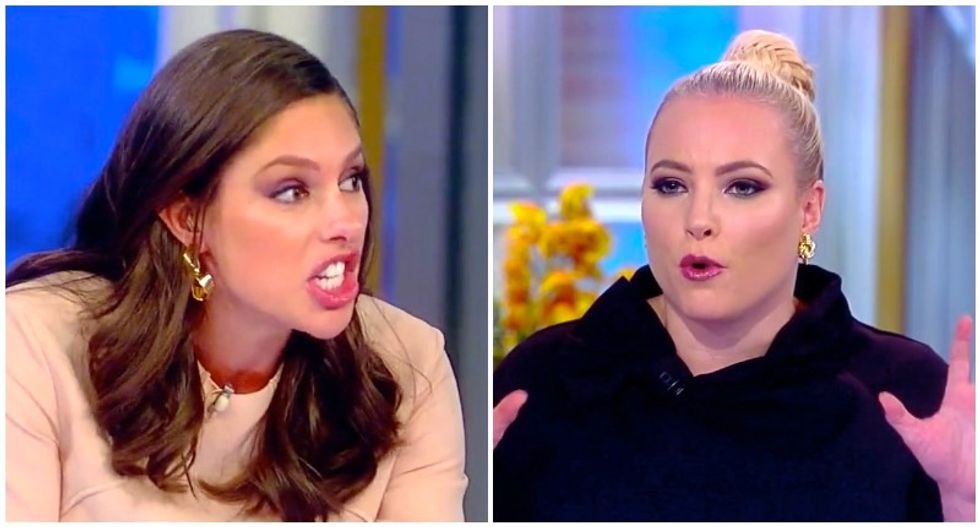 "The View" turned into a shouting match after conservatives Meghan McCain and Abby Huntsman tried to defend Ivanka Trump's use of personal email to conduct government business.

The conservative co-hosts admitted the situation was "hypocrisy," after President Donald Trump and other Republicans made similar conduct by Hillary Clinton a defining issue in the 2016 campaign -- and even called for her prosecution.

"This girl was there in 2016, was she in a convent?" said co-host Joy Behar. "She was watching TV just like the rest of us. How dumb can a person be to make the same mistake that he's been b*tching about the whole time?"

Huntsman pointed to Ivanka Trump's explanation, saying she didn't understand she could not use personal email for White House work -- and co-host Sunny Hostin shut her down.

"I call B.S. on 'I didn't know better,'" Hostin said. "It's the height of hypocrisy. That's one of the things her father ran on, and it was a significant part of his platform, but when you do this, that's what happens when you have this kind of nepotism in the White House. Her role is unprecedented."

Huntsman, whose father serves in the Trump administration as the U.S. ambassador to Russia, insisted the situation probably wasn't worth investigating.

"I know Ivanka a little bit, I have exchanged emails -- on the White House account -- and texts and all that," Huntsman said. "She is as scripted as they come, so if Democrats are going to use their time, because I think they've already talked about they're going to investigate this. There's enough to investigate, there's really no there, there. I would be shocked if there was."

McCain agreed Ivanka Trump's actions were hypocritical, but she also agreed there were more worthy topics of investigation.

"I will say, let us not forget Hillary had emails deleted by a computer specialist, amid a congressional investigation, she had her aides smash her devices with a hammer," McCain said. "I just am trying to explain the Republican side of this."

Host Whoopi Goldberg asked whether Clinton's actions explained away the facts in Ivanka's case -- and McCain insisted the two situations were hardly comparable.

McCain said there were too many Trump scandals to worry about, so this one should probably be allowed to pass.

"When a car alarm is going off every day, you get desensitized to what's really important," McCain said. "What we should be fearful of our president using his personal phone. I care much more about that."

Hostin said she thought the topic was, in fact, important -- but McCain disagreed.

"This would not be my No. 1 topic of conversation to choose for this show today," McCain said. "You guys chose that."

Huntsman said the issue was just a distraction, and Hostin jumped in.

Huntsman tried to backtrack, and McCain rushed to her aid, asking why her colleagues hadn't made a big deal out of Clinton's email use.

"Hold on a second," Goldberg said, as McCain and Huntsman battled Hostin in a fiery exchange of crosstalk.

Goldberg called for a commercial break, and McCain repeatedly shouted, "This is ridiculous," as the camera panned out.