The View's Abby Huntsman and Joy Behar clash over Trump's assault on media: 'He lies so much!' 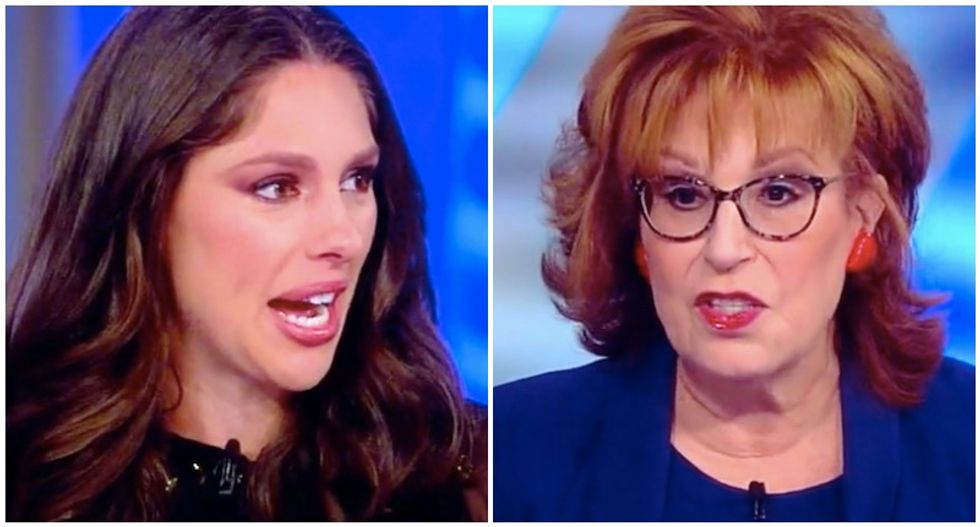 "The View" co-host Abby Huntsman tried to justify President Donald Trump's attacks on the media -- and Joy Behar explained why those assaults set him apart from other leaders.

The president told Axios that he attacks the press because they treat him unfairly and because his supporters love it -- and Huntsman essentially agreed.

"I actually think this anger and distrust with the media was alive and well before President Trump," she said. "I'll never forget on Election Day (2016), I was in Ft. Myers, Florida, at a diner talking to voters there, and they were telling me that finally someone they felt was speaking for them and their frustration."

However, Huntsman conceded the relentless attacks were harmful, although she agrees the media is at least partially at fault.

"It motivates his base and gets them out to vote for him," she said. "I think it's dangerous for the country. Every time I hear it, I hate it. I think it gets to a bad place. He's to blame, but the media takes the bait, too."

"Why is he, out of the 45 presidents, the only one to say the press is the enemy of people?" Behar said. "Because he is capable of 5,000 lies in less than 300 days, that's why. He lies so much, and he has to back up his lies by saying that they're lying. You see what he's doing? And he's the only one. George Washington didn't do it, Obama didn't do it, Ronald Reagan didn't do it -- none of them."

The history-shaping year that recently ended was a year of spectacular violence. It was the year of George Floyd and Breonna Taylor, the year when a pandemic took hundreds of thousands of lives, many of them needlessly. It was a year that forced us to recalibrate fundamental social and cultural systems, a year that spawned both a summer of protest and dozens of anti-government demonstrations featuring armed militia members around and inside state capitols. It was the year a Blackhawk helicopter performed show-of-force maneuvers over protesters in the streets of Washington. It was the year that QAnon went to Congress. It was and the year that bred — one week into the following year — a deadly insurrection at the seat of democracy, fomented by the president of the United States.