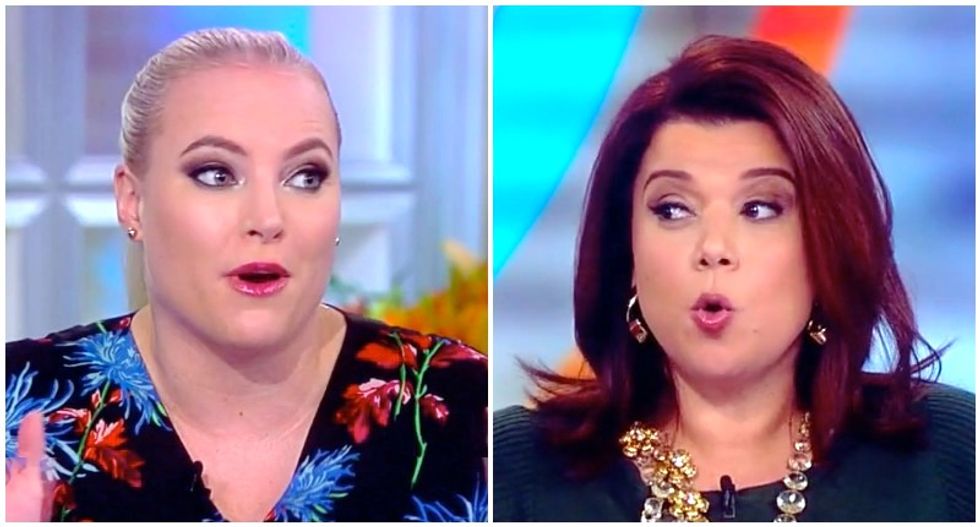 The Democratic gubernatorial candidate got a boost this week when Winfrey knocked on doors to campaign for her and delivered a powerful speech to encourage black and other minority voters to head to the polls, but McCain said that might actually hurt Abrams.

"Nationalizing yourself is always tenuous territory, because you don't want to look like you're someone who celebrities and East Coast elites like, and you're not going around your constituents," McCain said.

Co-host Joy Behar immediately pointed out a flaw in her logic.

"One of the biggest East Coast elites, Donald Trump, won," she said.

McCain insisted the president was a unique case, and she warned other candidates not to accept help from celebrities.

"Donald Trump is a different case," she said. "I'm telling you traditional candidates -- I think it's something Beto O'Rourke should be concerned right now, as well. I think when you look like you care too much about celebrity endorsements, especially after you haven't been elected for first time, you see people like Eric Cantor, Wendy Davis, Kelly Ayotte -- these are people who nationalize themselves too much."

"I think Oprah is in a class by herself," Navarro said. "So many of us grew up with her in our living rooms. What made Oprah so successful is how relatable she is."

She then poked a large hole in McCain's theory.

"She brings a very personal story to Georgia," Navarro said. "Remember, Oprah wasn't born in New York, she wasn't born in California, she's not an East Coast or Left Coast elite. She was born in Mississippi, in the segregated south. She's lived discrimination. When she talks about this, she talks about it in her own skin, from her own experience and from what our ancestors built. I think she brings a different type of credibility."

"It motivates people to get out and vote," Huntsman said. "That story that she told, that moved me. That would get me off the couch. I agree with all of you guys that Oprah, it's different than a Miley Cyrus or a Katy Perry, who I love, but they're not going to get me out to vote. What's different about Oprah, we let her into our home for decades."

"So we're basically saying Stacey Abrams has got it in the bag and she has no problems," McCain said. "We're presenting it right now that she's got Oprah and it doesn't matter anymore. Trepidation, as I said, be careful with it, and I don't know why I'm giving Democrats free advice, but be careful with this. Nancy Pelosi coming out saying you guys have it in the bag, it's neck and neck with (Republican Brian) Kemp -- be very careful."