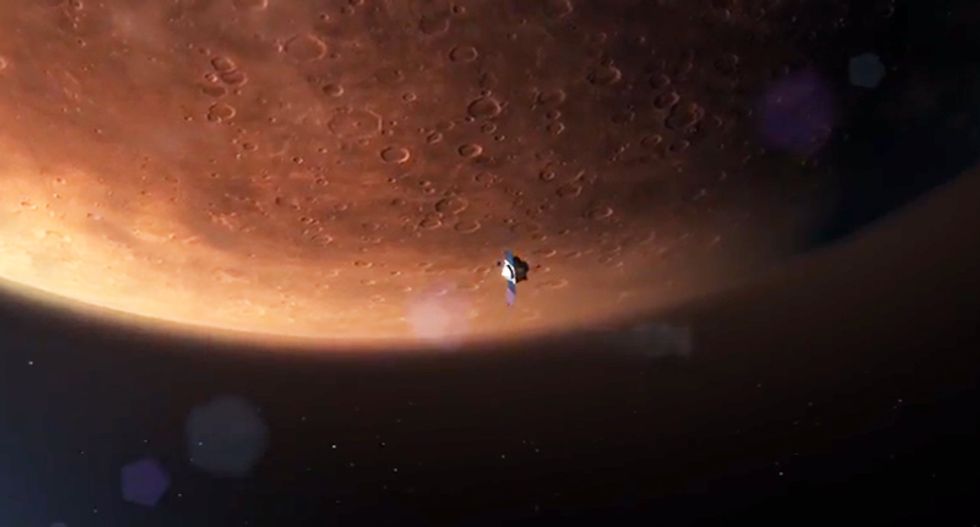 Mars Insight's goal is listen for quakes and tremors as a way to unveil the Red Planet's inner mysteries, how it formed billions of years ago, and by extension, how other rocky planets like Earth took shape.

The unmanned spacecraft launched nearly seven months ago, and is NASA's first to attempt to touch down on Earth's neighboring planet since the Curiosity rover arrived in 2012.

More than half of 43 attempts to reach Mars with rovers, orbiters and probes by space agencies from around the world have failed.

NASA is the only space agency to have made it, and is invested in these robotic missions as a way to prepare for the first Mars-bound human explorers in the 2030s.

The high drama of the entry, descent and landing phase begins at 11:47 am (1940 GMT) at NASA's Jet Propulsion Laboratory in Pasadena, California, home to mission control for Mars Insight.

A carefully orchestrated sequence -- already fully preprogrammed on board the spacecraft -- takes place over the next several minutes, coined "six and a half minutes of terror."

Speeding faster than a bullet at 12,300 mph (19,800 kph), the heat-shielded spacecraft encounters scorching frictions as it enters Mars' atmosphere.

The heat shield soars to a temperature of 2,700 Fahrenheit (about 1,500 Celsius). Radio signals may be briefly lost.

The heat shield is discarded, the three landing legs deploy, and the parachute pops out.

"We freefall for just a little bit, which is an absolutely terrifying thought for me," said Tom Hoffman, project manager of InSight.

But then, the spacecraft's thrusters begin to fire, further slowing down the 800-pound (365 kilogram) spacecraft to a speed of just about 5 mph (8 kph) when it reaches the surface.

Since there is no joystick back on Earth for this spacecraft, and no way to intervene if anything goes wrong, Hoffman described his emotions as mixed.

"I am completely comfortable and completely nervous at the same time," he said.

"We have done everything we can think to make sure we are going to be successful, but you just never know what is going to happen."

Hoffman, who is father to a two- and four-year-old, added that has "not been sleeping that great," though he said that might because of his rambunctious toddlers.

But when the first signal arrives at 2001 GMT, hopefully showing that the lander set itself down, intact and upright, "I am totally going to unleash my inner four-year-old at that point," he said.

Zurbuchen described InSight as "unique" because the waist-high lander contains instruments that were contributed by several European space agencies.

The German Aerospace Center (DLR) provided a self-hammering mole that can burrow 16 feet (five meters) into the surface -- further than any instrument before -- to measure heat flow.

Other significant contributions to the project came from the Space Research Center of the Polish Academy of Sciences and Astronika in Poland, the Swiss Institute of Technology in Switzerland, and the Imperial College and Oxford University in Britain.

By listening for tremors on Mars, whether from quakes or meteor impacts or even volcanic activity, scientists can learn more about its interior and reveal how the planet formed.

Understanding how Mars formed could reveal more about the processes that formed Earth, too.

Tech News Science
Please contact support@rawstory.com for customer support or to update your subscription. Report typos and corrections to: corrections@rawstory.com.