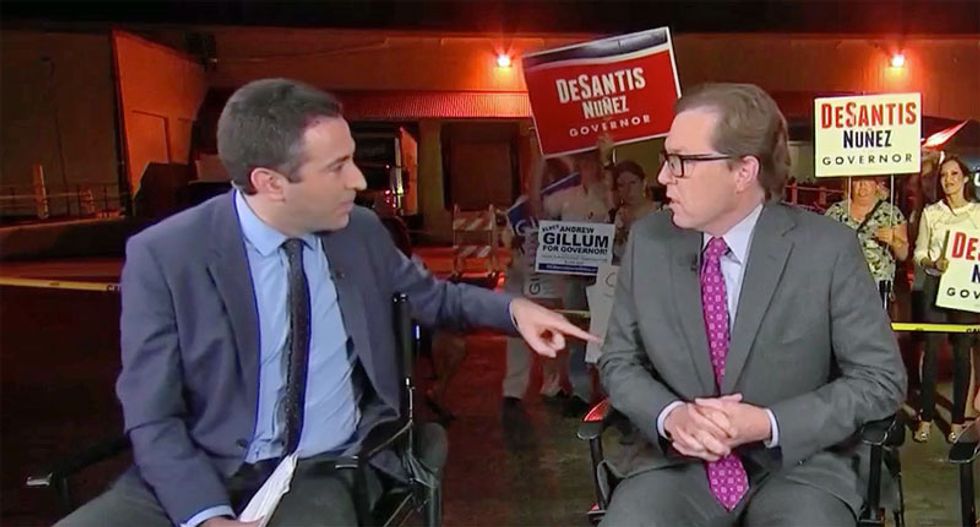 Shortly after the host of "The Beat with Ari Melber" reported that Florida would not accept recount results from Broward County because the numbers were uploaded two minutes late, Melber was joined by Brad Todd, senior advisor to the Scott campaign.

"Brad, your candidate may ultimately win, but he has sort of embarrassed himself by saying things aren't true, by alleging this process was going to hurt him," Melber noted.

"Every time when you're a kid and you said the dog ate my homework, the dog never ate your homework and they really didn't have this issue of two minutes ahead of time," Todd argued. "What happened was where Rick Scott gained 779 votes in Broward County and they decided maybe that's not a good thing, let's go the other way."

"You sound like your candidate. you're saying something, do you have any evidence? Melber asked.

"That's not what I'm asking you," Melber pressed. "We've been covering Brenda Snipes' problems. I'm asking you if you have any specific evidence that this was a political operation with regard to the two minutes."

Melber turned to Miami Herald reporter Alex Harris, who was in the room.

"Did you find when you were inside, any evidence the two minute error was a way to deprive Rick Scott of votes?" Melber asked.

"To me it seems, like why would they do that work to be embarrassed again? This is something this elections department has been working hard on, to avoid any more embarrassment and here's another one?" Harris replied.

At the end of the interview, Melber addressed Todd.

"You've made interesting allegations. Some relate to the incompetence that's been documented, some have no support whatsoever," he concluded.