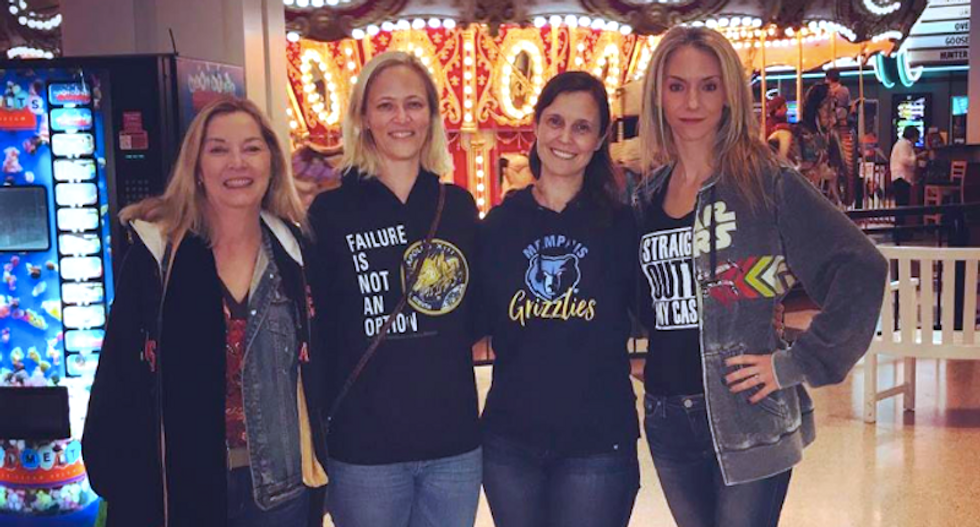 Four white women went to a Tennessee shopping mall wearing hoodies to test a hunch about racism -- and they were disappointed to be proven right.

Kevin McKenzie, a black former reporter for The Commercial Appeal, started recording the incident after watching a white security guard tailing the group of young men like "he was a cat after mice."

“For reasons I didn’t hear, one young man in what appeared to be a nylon blue and white jacket with a hood that was not on his head was handcuffed by a Memphis officer and led away as my video rolled,” McKenzie said. “That’s when a black sheriff’s deputy approached me and told me I also was breaking the mall’s rules.”

McKenzie, who was issued a misdemeanor citation, told police the mall's policy was discriminatory, but the Indianapolis-based Simon Property Group that owns the shopping center said the policy was intended to ensure public safety so employees and security cameras can see the faces of anyone at the property.

But several white women decided to test the policy -- and found they could walk around the mall wearing hoodies, even with their hoods pulled over their heads.

“It just struck a chord on us that we could do that,” said Sherry Ennis, one of the women. “We could walk through there, we could take pictures, we could wear whatever we wanted.”

Another woman, Shannon Arthur, posted the results of their experiment on social media, and said security guards asked them to pull down their hoods but let them remain on the premises.

"Sometimes our hoods were up, sometimes our hoods were down," Arthur wrote. "If a security guard spotted us with our hoods up, they very politely asked us to take them down. One guard said it was because they need to be able to identify everybody’s faces. So we said, 'Sure,' took them down, walked on, and put the hoods back up a bit later. Repeat. No threats. Point made."

McKenzie told the TV station he never saw the young black men with their hoods pulled over their heads before police got involved, and Ennis said she and her friends had proved a point.

“We’re not against law enforcement no rules at all, but if they’re enforced equally, I’m up for that,” Ennis said. “We made a total point that it’s not enforced equally.”