The world’s plastic problem is bigger than the ocean 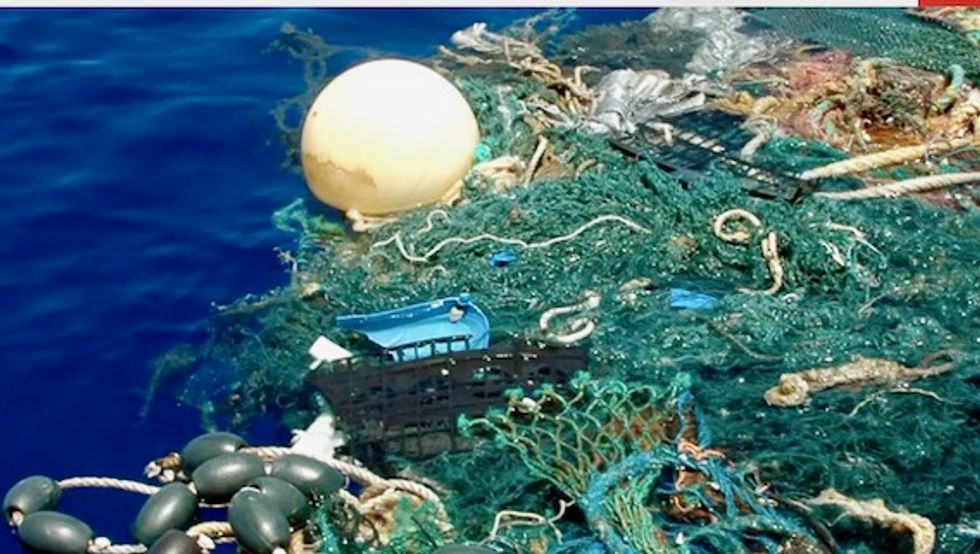 Plastic floats on and near the surface of the ocean. NOAA

As you read this, a strange object that looks like a 2,000-foot floating pool noodle is drifting slowly through the central north Pacific Ocean. This object is designed to solve an enormous environmental problem. But in so doing, it brings attention to a number of others.

There are an estimated five trillion pieces of plastic floating on and in the world’s oceans. The massive pool noodle will move through the Great Pacific Garbage Patch, driven by the wind and currents and picking up the plastic it encounters along the way. Ocean Cleanup, the organization that developed the device, promises “the largest cleanup in history.”

If it works, the device – blandly named System 001 – could make a dent in the enormous amount of ocean-borne plastic. But once that plastic is collected the options are not good. That’s where an environmental ethicist like me starts thinking about where this plastic will end up next. The ocean is better off without it, of course, but the plastic problem has many more layers than it first appears.

The struggle of sorting

Recycling plastic is only possible if it can be meticulously separated into its various chemical types. What people generally describe with the single word “plastic” encompasses seven main types of materials – the ones used to make soda bottles, trash bags, cling wrap, shopping bags, yogurt containers, fishing nets, foam insulation and non-metal parts of many household appliances. Recycling each of these types, which you might know by their acronyms – such as PETE, LDPE, PVC, PP and HDPE – requires a different chemical process. 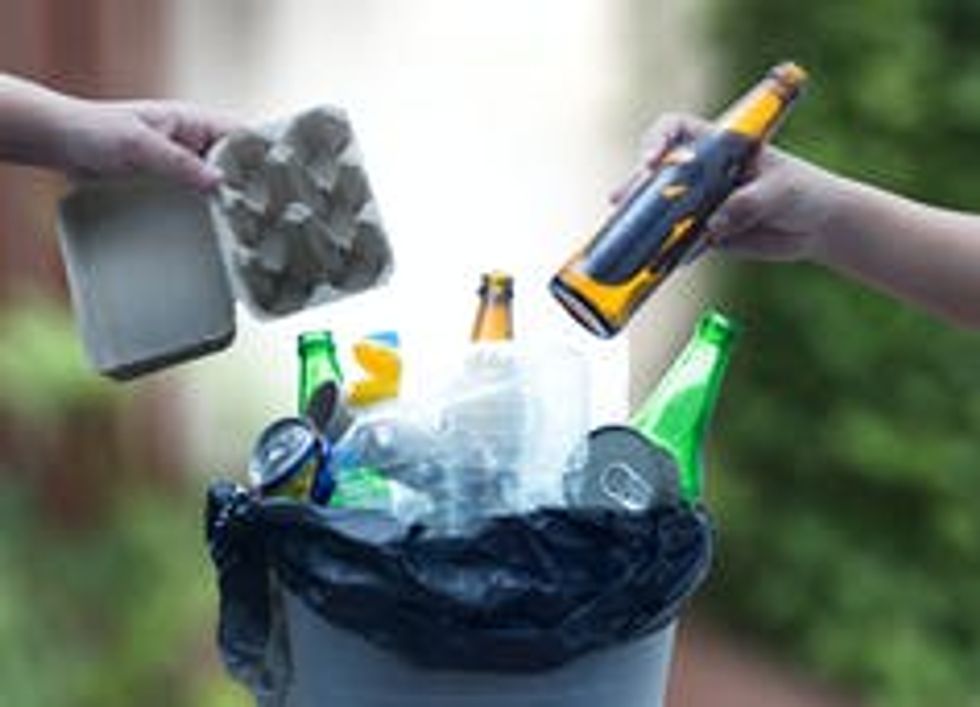 Sorting materials is one of the most difficult challenges in recycling.

That’s why many household recycling programs ask residents to sort their plastics – and why communities that let people put recyclables of all types into one big bin employ people and machines to sort it after it’s collected.

Sorting won’t be easy with the plastic in the ocean. All the different kinds of plastic are mixed up together, and some of it has been chemically and physically broken down by sunlight and wave action. Much of it is now in tiny pieces called microplastics, suspended just below the surface. The first difficulty, but by no means the last, will be sorting all that plastic – plus seaweed, barnacles and other sea life that may have attached itself to the floating debris.

Ocean Cleanup is working on how best to reprocess, and brand, the material it collects, hoping that a willing market will emerge for its uniquely sourced product. Even if the company’s engineers and researchers can figure out how to sort it all, there are physical limitations to how useful the collected plastic will be.

The act of recycling involves grinding up materials into very small pieces before melting and reforming them. An inescapable part of that process is that every time plastic is recycled, its polymers – the long chemical sequences that provide its structure – become shorter.

Generally speaking, lighter and more flexible types of plastic can only be recycled into denser, harder materials – unless large amounts of new virgin plastic are added to the mixture. After one or two rounds of recycling, the possibilities for reuse become very limited. At that point, the “downcycled” plastic material is formed into textiles, car bumpers or plastic lumber, none of which end up anywhere else but the landfill. The plastic becomes garbage.

What if there were a way to ensure that plastic was genuinely recyclable over the long term? Most bacteria can’t degrade plastics because the polymers contain strong carbon-to-carbon chemical bonds that are different from anything bacteria evolved alongside in nature. Fortunately, after being in the environment with human-discarded plastics for a number of decades, bacteria seem to be evolving to use this synthetic feedstock that pervades modern life. 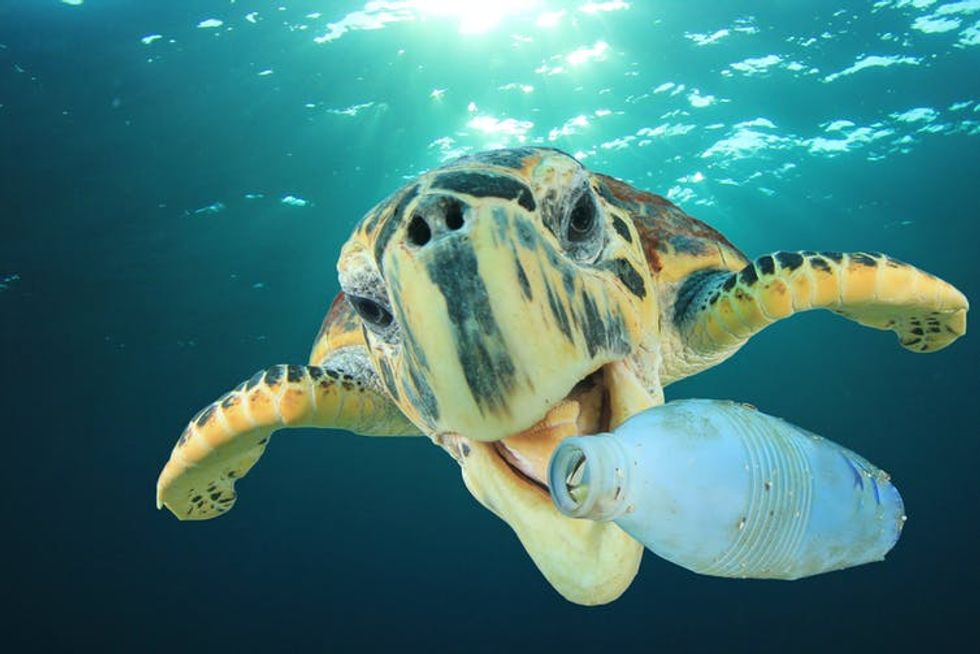 Sea turtles have not yet evolved to eat plastic – but some bacteria have.

In 2016, a team of biologists and materials scientists found a bacterium that can eat the particular type of plastic used in beverage bottles. The bacteria turns PET plastic into more basic substances that can be remade into virgin plastics. After identifying the key enzyme in the bacteria’s plastic-digestion process, the research team went on to deliberately engineer the enzyme to make it more effective. One scholar said the engineering work has managed to “overtake evolution.”

At this point, the breakthroughs are only working in laboratory conditions and only on one of the seven types of plastics. But the idea of going beyond natural evolution is where the ears of an environmental philosopher go on alert.

Discovering the plastic-eating bacterium and its enzyme took a lot of watching, waiting and testing. Evolution isn’t always quick. The findings suggest the possibility of discovering additional enzymes that work with other plastics. But they also raise the possibility of taking matters into our own hands and designing new enzymes and microbes.

Already, completely artificial proteins coded by synthetically constructed genes are acting like artificial enzymes and catalyzing reactions in cells. One researcher claims “we can develop proteins – that would normally have taken billions of years to evolve – in a matter of months.” In other labs, synthetic genomes built entirely out of bottles of chemicals are now capable of running bacterial cells. Entirely synthetic cells – genomes, metabolic processes, functional cellular structures and all – are thought to be only a decade away.

This coming era of synthetic biology not only promises to change what organisms can do. It threatens to change what organisms actually are. Bacteria will no longer just be naturally occurring life forms; some, even many, of them will be purpose-built microbes constructed expressly to provide functions useful to humans, such as composting plastic. The border between life and machine will blur.

The plastics polluting the world’s oceans need to be cleaned up. Bringing them back to land would reinforce the fact that even on a global scale, it’s impossible to throw trash “away” – it just goes somewhere else for a time. But people should be very careful about what sort of technological fixes they employ. I cannot help but see the irony of trying to solve the very real problem of too many synthetic materials littering the oceans by introducing to the world trillions of synthetically produced proteins or bacteria to clean them up.

Christopher J. Preston, Professor of Philosophy, The University of Montana