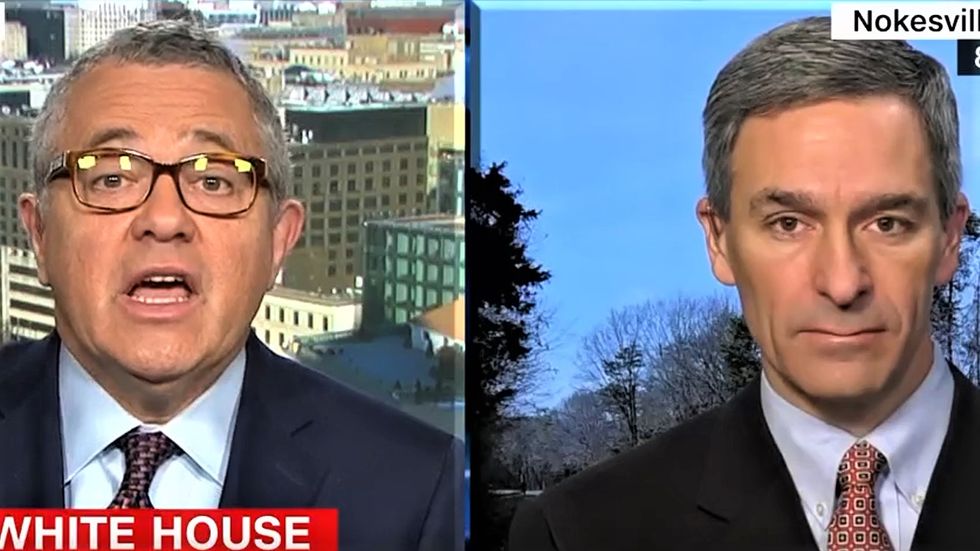 CNN legal analyst Jeffrey Toobin on Tuesday shut down Trump defender Ken Cuccinelli's argument that President Donald Trump did nothing wrong when he allegedly ordered the illegal payment of hush money to at least two mistresses during the 2016 presidential campaign.

When discussing Trump being implicated in a felony campaign finance violation, Cuccinelli said that there was no difference between this case and the case of former Sen. John Edwards, who also paid off a former mistress in exchange for her silence about their affair.

Toobin, however, shot down this argument quickly by pointing out that Edwards was, in fact, prosecuted for allegedly breaking the law.

"The Edwards example, as you point out, was prosecuted [and] was a much, much weaker case," Toobin said. "Here you have transactions on the eve of the election to cover up extremely politically damaging material because the election is happening."

Toobin then pointed out that Trump's affairs with adult film star Stormy Daniels and Playboy model Karen McDougal occurred years before Trump ran for president -- which means that he would have tried to buy their silence sooner if he were really concerned about them hurting his family.

"Of all times to make these expenditures, it's right on the eve of the election," Toobin said. "This was an embarrassing, politically toxic subject for him, he wanted to cover it up, so he paid the money to cover it up to help him win the presidency."