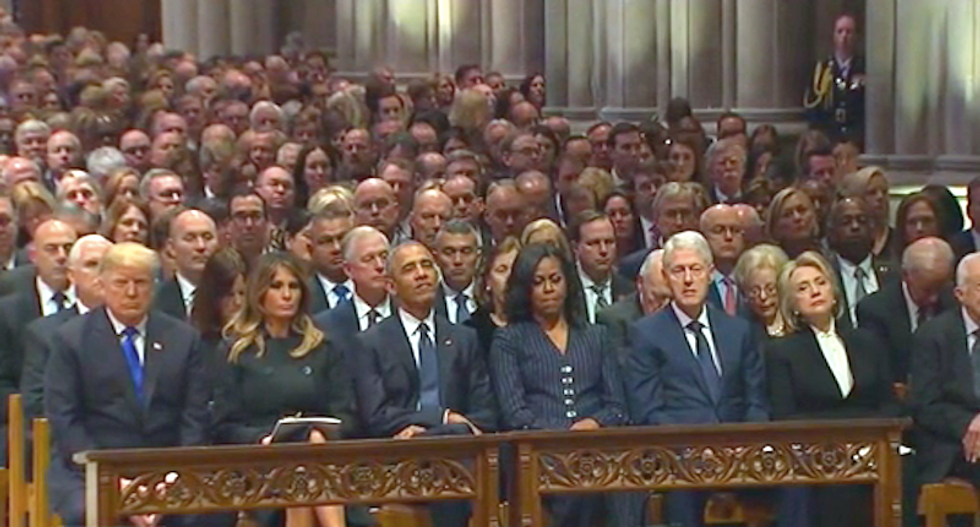 Fox News anchor Chris Wallace couldn't help but notice the chill that accompanied President Donald Trump as he took a seat among the surviving commanders in chief at George H.W. Bush's funeral.

The president and first lady Melania Trump sat down next to Barack and Michelle Obama, who had just been chatting and smiling with Bill and Hillary Clinton, but conversation ceased when the Trumps arrived.

"I have to say I was struck when President Trump and Melania Trump came to the front row that it was as if a chill had descended on that front row," Wallace said. "You had seen a lot of chatty talk between the Clintons and the Obamas, the Carters. But when Donald Trump sat down, the greeting that he was given by Barack Obama and Michelle Obama was about as cool as it could have been."

"It seemed like they exchanged hello, good morning," he added. "That was it, and at that point they all stopped talking to each other."

Wallace said the interactions showed some hard feelings toward Trump by his predecessors, which he said was highly unusual.

"There are some ill feelings among some of the people in the front row," he said, "and I have to say that where you usually have a president's club, and even people that ran against and maybe one beat the other, that doesn't seem to have been extended to President Trump when you see them sitting in that front row."