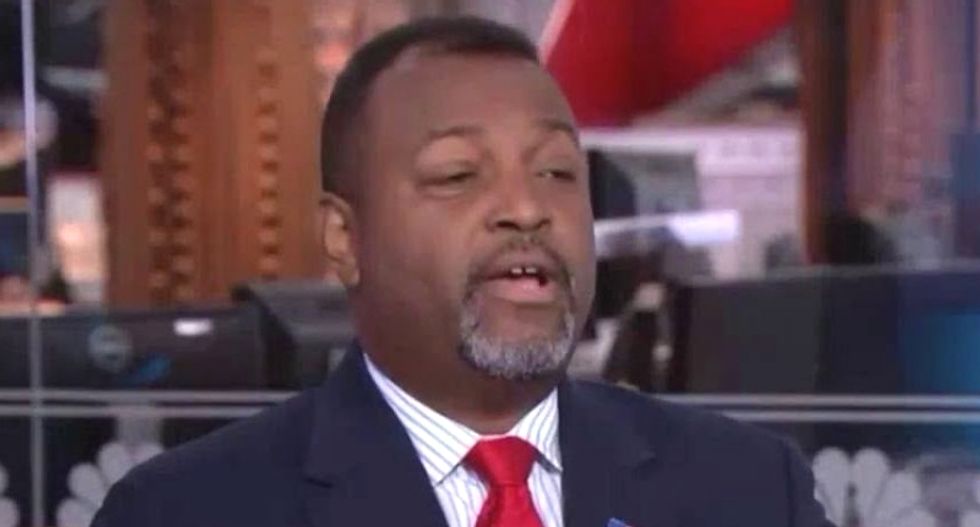 MSNBC commentator Malcolm Nance had an epic dialogue Monday about the president's availability to be manipulated and blackmailed due to his "unquenchable ego."

Nance, who is an expert in terrorist strategy, torture and Russian cyber warfare, spoke about Russian gun activist Maria Butina, who made a plea deal with prosecutors.

Butina ran a small NRA-like organization in Russia where guns are banned.

"When you go backward and see them creating these networks of social and personal relationships, all you can come up with is that it's got to be an intelligence operation," Nance said. "I wasn't sure whether Butina -- and I wrote about her extensively in one of my books -- whether she was actually a clandestine service officer with the S.V.R., the agency under the F.S.B. Or whether she was an intelligence contractor sent out to co-opt all of these middle-aged men with a woman with a gun, which is very seductive here in the United States. Right now her being held by the United States likely indicates she is a Russian spy."

Some analysts wonder if there will be a spy swap to send Butina back to Russia.

"Right. Bribery is right up there at the top, which is why we also have the Emoluments Clause," Nance said. "They foresaw that someone was going to do something dirty, and that's why they have the Impeachment Clause. All an impeachment does is remove the powers of the presidency from the person who is in the seat. It doesn't say that you're immune."

He noted that he's heard commentators on television saying Trump has "immunity" because he's the president, but Nance called it absolutely false.

"He is a man. He is a citizen of the United States," Nance continued. "But let's step back and look at this the way -- a little further than what Clint [Watts] had said about the impact on this election. They didn't just steal an election. This was the co-option of the national security apparatus of the United States via foreign power, by an ex-KGB director. This election was far more than just raising sanctions. This is getting a perfectly recruitable Russian asset, a man with an unquenchable ego, a narcissist who could be easily manipulated in blackmail into power, and he dances on their string. That is why he needs to be removed from power."