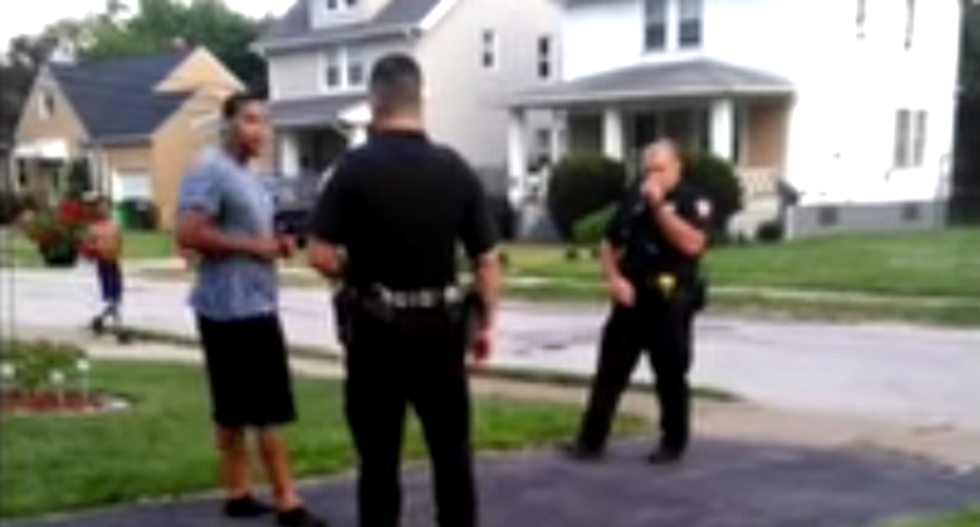 An Ohio city agreed to pay $80,000 to settle a First Amendment lawsuit filed by a black man who said police took him into custody for laughing at officers -- and made up claims about him to justify the arrest.

Robert Spencer was arrested in July 2017 by Garfield Heights police officers Kenneth Falzini and David Simia, who said he threatened and shoved them while resisting arrest, but video shot by his girlfriend contradicted their claims, reported the Plain Dealer.

"I was arrested and prosecuted for laughing while black," Spencer said.

The video showed Spencer insult the officers as “Beavis & Butthead” and “Elvis," and the black man told them at one point "y'all got the motherf*cking right to remain rank."

Spencer's girlfriend told police that he had not threatened them with harm, and that he had been "out here talking bullsh*t with the kids" who can be heard and seeing playing in the background and laughing at the man's wisecracks.

But police handcuffed Spencer and placed him in a patrol car, according to the suit.

“All you had to do was shut the f*ck up," Simia said, according to the lawsuit. "We weren’t even going to arrest you.”

Spencer was jailed for three days before posting bond, and a corrections officer forced him to clean his cell and others under threat of pepper spray.

A jury later acquitted Spencer on charges in the case, and the 30-year-old filed a lawsuit in July that the city agreed to settle this week.

In addition to paying damage, Garfield Heights agreed to train its officers on the First Amendment and its relationship with their duties, and on limitations on forced labor by inmates.

Spencer, who has prior felony convictions on weapons charges, is currently awaiting trial in two separate felony cases in Cuyahoga County, facing charges of failure to comply, obstructing official business and drug possession and trafficking.