Why are people accusing 'Lord of the Rings' author JRR Tolkien of being racist against orcs? 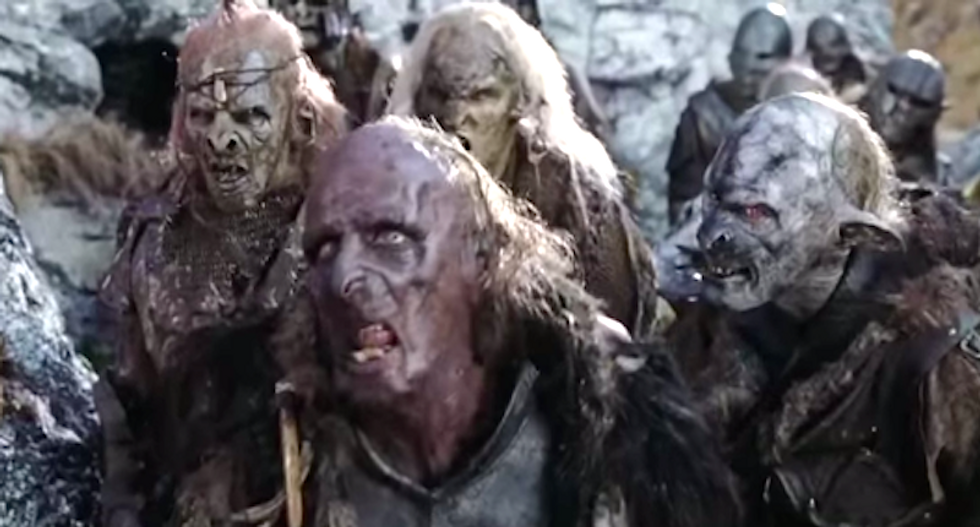 Screen shot from Lord of the Rings: The Two Towers (YouTube)

In demonising orcs, the ugly, monstrous enemy of the elves, did JRR Tolkien betray a belief that “some races are worse than others”? That’s the debate that has been at the heart of claims in the British press recently accusing the Lord of the Rings author of harbouring racist views.

The subject of Tolkien and race is not new; it has been discussed comprehensively by scholars, including my own study. What’s more, it has already been explored extensively in the media. The last burst of this media debate was in 2002, prompted by Peter Jackson’s Lord of the Rings movie trilogy.

The latest media interest was triggered by a Wired podcast with fantasy fiction author Andy Duncan in which he discussed his 2002 short story Senator Bilbo, whose main character shares a name with Tolkien’s Hobbit hero, Bilbo Baggins. In it, Duncan imagines the real Senator Theodore G Bilbo – the early 20th-century, white supremacist senator of Mississippi – opposing the immigration of orcs in Tolkien’s Shire in a post-Lord of the Rings era.

This fictional senator is against any foreigner who may “contaminate” the purity of the Shire. The story is a clever, well-written parody in which orcs are portrayed as misunderstood and discriminated against. But in the podcast, Duncan spoke of the “repeated notion in Tolkien that some races/peoples are worse than others” and how this idea can lead to dangerous outcomes.

Is he right? Well, yes and no.

Tolkien’s Middle-Earth is hierarchical, employing the medieval “chain of being”, a powerful visual metaphor that ranked all life forms according to their proportion of “spirit” and “matter”. God and the angels are at the top, human beings below, animals further down, and so on.

Similarly, Tolkien’s elves are at the top of the Middle-Earth hierarchy, while orcs are at the bottom, because of their corresponding moral and spiritual qualities (or lack of). In Tolkien’s mythology, orcs are traditionally “monstrous”; they represent corrupted, twisted versions of elves and men, made by Morgoth (the original Dark Lord of Tolkien’s world).

Theologically, this works. And it still worked as long as Tolkien was writing a mythology, that is, the cycle of elvish myths and legends that make up The Silmarillion (begun before Lord of The Rings, never finished, and published after Tolkien’s death).

But in writing The Lord of the Rings, Tolkien switched narrative modes. He was now writing a novel, with different demands of characterisation, dialogue, and so on. The orcs became more rounded characters. They acquired a clearer physical appearance, humour and personality. They became people.

At around the same time, Tolkien started rethinking the origin of the orcs. “Corrupted” versions of elves and men made sense theologically, because the evil Morgoth wouldn’t have had the power to create new beings but only twist existing ones. But in that case, did these orcs have free will? Could they be redeemed?

Tolkien agonised over this, and the idea that these monstrous creatures could once have been lofty elves. He tried out several explanations about their origin, even the possibility that orcs were automata with only echoic speech, like parrots.

He never completed The Silmarillion, so there is no final “solution” to the question of their origin. Yet, the orcs in The Lord of the Rings undoubtedly have racial characteristics which are problematic: we never get a detailed description in the text, but recurring traits include slanted eyes and swarthy complexions. These elements sound straight out of Victorian anthropology, linking mental qualities and physique.

Tolkien wasn’t the first to make evil and monstrous fantasy beings seem racially “other”. George MacDonald’s goblins in The Princess and the Goblin are equally (and uncomfortably) a product of 19th-century anxieties about race and evolutionary degeneration. As award-winning black fantasy author NK Jemisin has commented, “Orcs are fruit of the poison vine that is human fear of ‘the Other’.” Does that mean that Tolkien was racist? Well, it’s more complicated than that.

Literary texts are not created in a vacuum. They are part of a tradition. They respond to other texts and their expectations. Tolkien’s early work was an attempt to write a mythology, so monstrous beings would be very much expected. George MacDonald had already taken goblins from European folklore and made them the enemy of his “good” characters, and Tolkien borrowed the term “orc” from demonic beings in Beowulf.

That Tolkien’s monsters (like MacDonald’s) also responded to anxieties, concerns, and even “scientific” debates of his time about racial characteristics is not unexpected, but adds a layer of complexity to the orcs. Though Tolkien denounced “racialist” theories, refused to declare Aryan origin to secure a German translation of The Hobbit, and railed against Nazi Germany, it doesn’t mean that some prejudices bequeathed by his late-Victorian/early-Edwardian upbringing didn’t creep into the worldview we see in Middle-Earth.

Ideology is a powerful thing and its role in literature is complicated. There are authors who write with a social or political agenda. And there are authors who don’t, but their worldview, beliefs and values are implicit in the texts they produce. I believe Tolkien’s racial prejudices are implicit in Middle-Earth, but his values – friendship, fellowship, altruism, courage, among many others – are explicit, which makes for a complex, more interesting world.

In The Lord of the Rings, Middle-Earth is a place where different “races” and peoples need to come together and cooperate to triumph over what is predominantly a moral foe. The scene where Sam Gamgee is looking at a dead foe, wondering whether he was truly evil, or just a fellow being coerced into war, is far from demonising the enemy or dehumanising the “other”. Such complexities are the reason some literary works continue to be read and have different meanings for new generations.