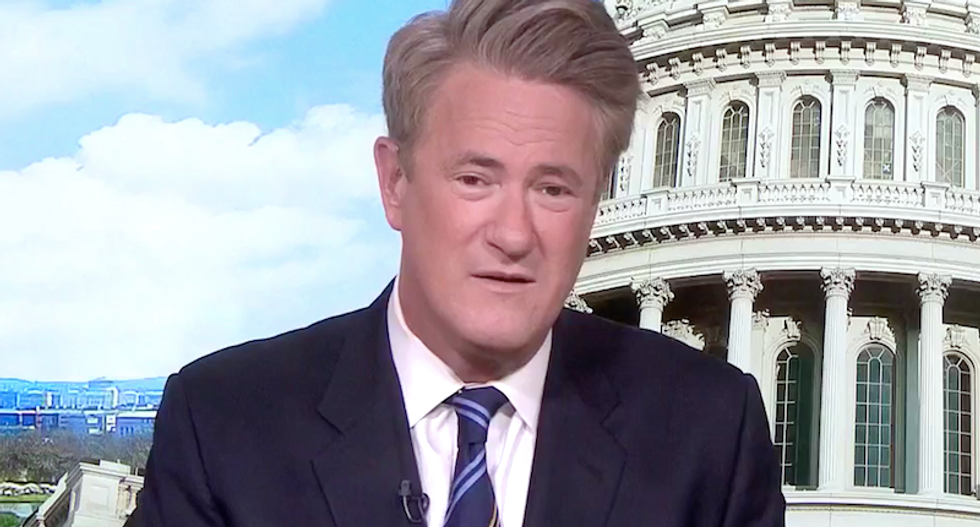 MSNBC's Joe Scarborough blasted President Donald Trump as a coward for selling out U.S. foreign policy to "thuggish" dictators in Russia and Turkey.

The "Morning Joe" host ripped Trump for spreading lies to American troops during a surprise visit to Iraq, but he said the president had already done worse by folding to dictators who may hold compromising information over him.

"Things are changing under Donald Trump," Scarborough said. "U.S. leaders once stood up to bullying threats from tyrannical thugs, from Turkey or from Russia. But now, it's not even close."

"Last week, it's sad to say, our president caved like a quivering coward by threats coming from Turkey's thuggish leader, (Recep Tayyip) Erdoğan," he added. "Donald Trump bailed out on our allies and he ran off his beloved defense secretary all in response to a threatening phone call from the leader of Turkey. Are you kidding me?"

Russia also has reportedly threatened Trump over Saudi Arabia, and Scarborough said the president gave Vladimir Putin a gift by ordering U.S. troops out of Syria.

"Donald Trump attacked Barack Obama's foreign policy approach of leading from behind for years," he said, "but now we have a weak president who is in full retreat across the globe and he has gifted the Middle East to Russia, to Iran and to ISIS. It just seems to me that we aren't the suckers after all, Mr. President -- you are.

Scarborough said the president's lies corrupted everything he touched, and caused great harm to U.S. interests.

"It's the intervening madness that we see every day, including yesterday where he did something right (by visiting U.S. troops deployed overseas)," Scarborough said. "Even in doing something right, he figures out a way to sow chaos. That creates more crises for our troops and for our diplomats and for our allies, and they'll be forced to deal with that chaos until the day that Donald J. Trump exits the White House for good."