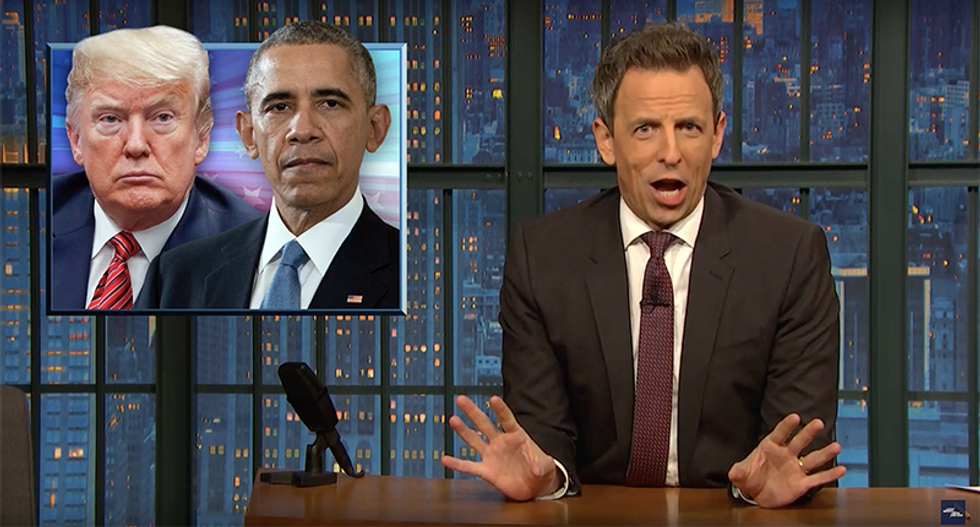 The latest argument coming out of the Republican Party and the Trump White House is that former President Barack Obama did the same thing that his successor did and thus shouldn't be prosecuted.

“'Democrats can’t find a Smocking Gun tying the Trump campaign to Russia after James Comey’s testimony. No Smocking Gun...No Collusion.' @FoxNews That’s because there was NO COLLUSION. So now the Dems go to a simple private transaction, wrongly call it a campaign contribution, which it was not (but even if it was, it is only a CIVIL CASE, like Obama’s - but it was done correctly by a lawyer and there would not even be a fine. Lawyer’s liability if he made a mistake, not me). Cohen just trying to get his sentence reduced. WITCH HUNT!" Trump tweeted early Monday morning.

"My God," Meyers began, when responding to the Trump tweets. "It was legal but if it wasn't it was civil and if it wasn't it's not my fault. But to put it in a way that Donald Trump will understand: where there's smock there's foyer."

"But let's address for a second this argument that Obama did the same thing," Meyers continued. "Because it's an argument that Trump supporters are starting to make and it's insane. Every campaign makes paperwork errors. It happens all the time. In 2013 Obama's campaign was fined for omitting some donor's names. Independent experts called it 'relatively minor' and even a Republican lawyer said it was 'a very clean audit report for the Obama campaign.'"

Meyers said that there's a huge difference between Obama's "accounting error" and Trump's hush payment to cover up his affair.

Trump didn't make an accounting error or even a paperwork error, he made illegal hush payments before the election to quiet accusers. Trump allies are claiming that it had nothing to do with the election and these were personal issues, though they didn't clarify if this happens so frequently that it's typical to pay off women. That would be the only way Trump could wiggle out of the idea these hush payments were election-related.