WATCH: The 4 most humiliating moments for Donald Trump in his wild White House meeting with Dem leaders 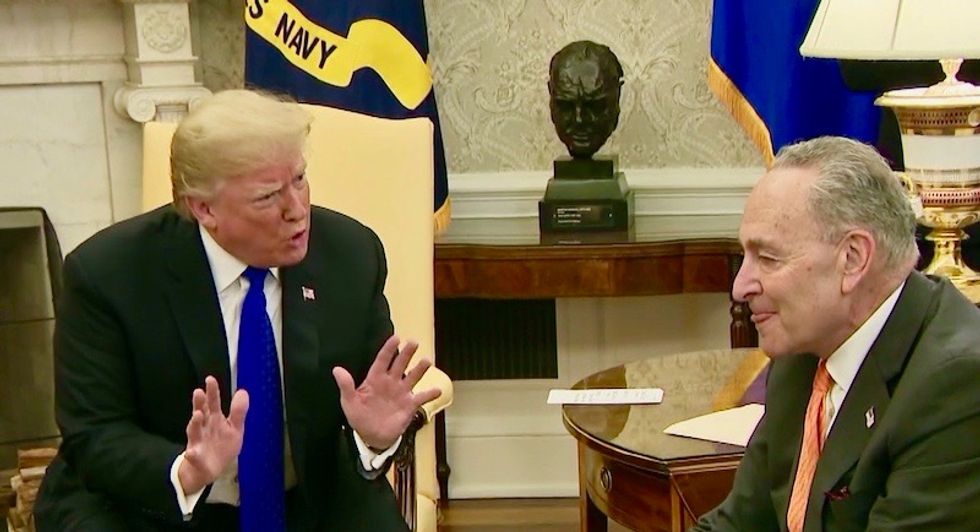 As the two Democrats repeatedly asked to negotiate behind closed doors, Trump invited news cameras to keep rolling as he sparred with them over the border wall.

This proved to be an interesting decision, as the two Democrats remained respectful yet firm with the president, at times explaining how the legislative process works and at other times baiting him into taking responsibility for any harm that comes from his brinkmanship on the budget.

Trump's own Republican party doesn't support his wall, which is why Congress is on the verge of a government shutdown.

1. Schumer shuts down Trump in the middle of his opening rant

Things started to get chippy when Trump made a joke about how easy it would be to fund the wall and Schumer replied.

"I would not like to see the government close... [but] we will see what happens over the next short period of time," Trump said.

Schumer brought up Trump's constant lies, including confronting him about the "bottomless Pinocchio" rating he was just given by the Washington Post.

Schumer then cornered Trump on funding the government and Trump's willingness to shutdown the government if he doesn't get his way on the border wall. Congress has a plan to avoid a shutdown and has the votes to send it to Trump's desk, Schumer said.

"If it's not good border security I won't take it," Trump said.

Pelosi called out Trump's lies on having Republican support for the wall.

"The fact is, you do NOT have the votes in the House," Pelosi said.

"If I needed the votes for the wall in the House, I would have them in one session," Trump claimed.

"Well then go do it!" Pelosi replied.

4. Schumer gets Trump to take full responsibility for what he later called "the Trump shutdown"

Toward the end of the public part of the meeting Trump said he would be "proud" to shut the government down over border security.

"I will take the mantle!" Trump said. "I will be the one to shut it down."

Watch the entire interview in the three videos below.