Watch: MSNBC panel explains why everyone was unhappy about Trump attending Bush funeral 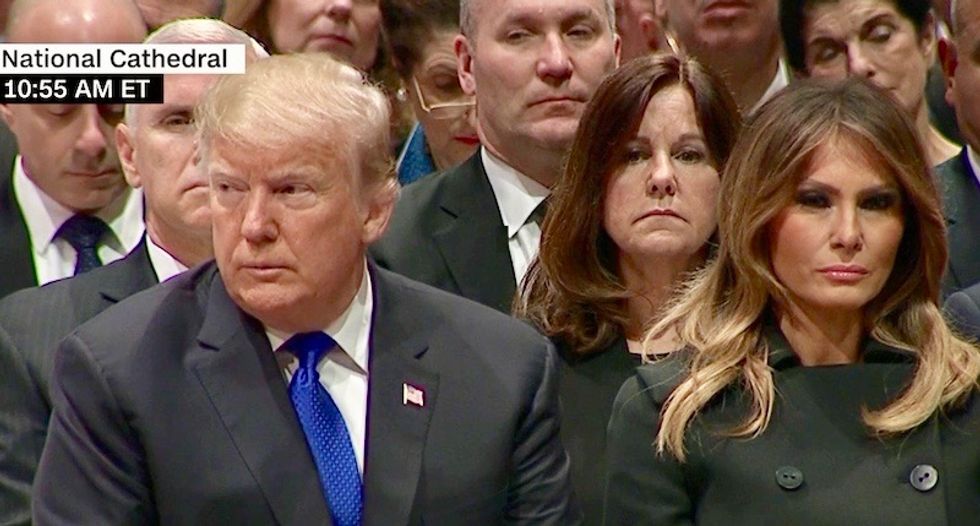 President Donald Trump did not attend former First Lady Barbara Bush's funeral, reportedly under the orders of Bush herself who didn't want him there.

However, Trump did attend the funeral of former President George H.W. Bush on Wednesday, arriving late and not being warmly greeted by the other former presidents in attendance.

An MSNBC panel led by host Brian Williams discussed the ways in which the funeral served to contrast the life of Bush with the current Republican president, Donald Trump.

"There was a presence in the front row that needs to be discussed and that was the current president, whose job today was to show up, to attend—he did not have a speaking role—and to be respectful," said Williams.

Nicolle Wallace, a former aide to Bush's son, said that Trump performed the duty entrusted to him, of attending without making a scene, as well as could be expected.

"Even his presence said more about the 41st president and the Bush family than it did about him," she said. "He was a good guest. And I think that's all we need to say about him right now. But it became uncomfortable when every one of the people who eulogized the 41st president talked about civility, talked about generosity. You could feel the—it was a contrast. I don't think it was quite a rebuke but it was such an obvious, an obvious contrast to what we see now in the Oval Office."

Former RNC chairman Michael Steele said that there was a "stark" difference between the warm greetings every other president exchanged and Trump.

"There were those moments during those eulogies that spoke about the character of not just a man but a president, who leads a country," Steele said. "In good times and difficult times. And if you have paid attention at all in the last of the events of two years you could not help but have that moment of contrast... it was stark the difference when he arrived."