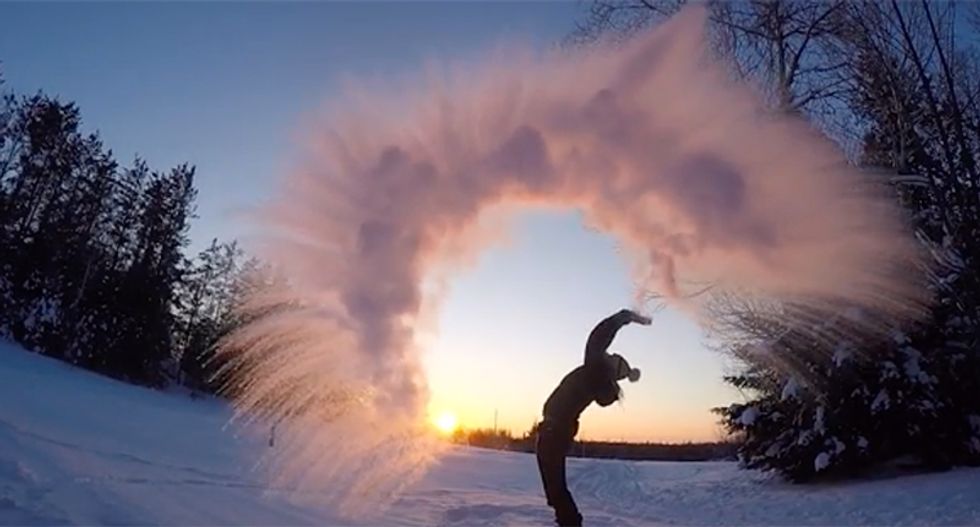 Eighty percent of the United States is below freezing and while Americans are hunkering down, some are also taking photos and videos of the most shocking things they're seeing.

A "snow squall" hit New York Wednesday, sending many to search what exactly a squall is. It differs from an everyday snowstorm in that the winds must increase at least 16 mph and exceed 25 mph.

One Maine anchor illustrated the bitter cold by soaking one of his white dress shirts and hanging it outside. It took less than 20 minutes to freeze solid.

Just to show you how cold it is, I soaked one of my dress shirts then hung it up outside. Less than twenty minutes… https://t.co/Ndlbl3tKul
— Jeff Peterson (@Jeff Peterson)1548937907.0

Another person who tried the trick was able to get the shirt to stand up on its own because it was so frozen solid.

The temperatures in Chicago overnight were so cold that one person blew a bubble and filmed it as the freezing air crept down the bubble and hardened it. They then cracked the bubble, instead of popping it.

Some areas were so cold that it made getting out of the door a little difficult. This is on the inside of the door.

And one woman showed how the windows inside of her home were frozen too.

Frequently, the cold air prompts people to try the boiling water trick. Curious folks bring pots of boiling water outside and throw it into the air to watch it freeze or evaporate entirely. Inevitably, someone doesn't think before they throw the boiling water. Such was the case with this man below:

These Iowa men did it the correct way and filmed it in slow motion:

As did these folks.

But this one takes the cake. Warm water in a super-soaker firing into the air resulted in a stunning fountain of freezing water.

One person filmed a stunning time-lapse video showing how lake-effect snow begins. The video shows steam rising from the Great Lakes as the water comes into contact with the icy cold air.

Here's another of the steam in Chicago:

But the best is this man. His above-ground pool had frozen over enough for him to walk on it. However, the further he moved from the edges the thinner the ice got. It ends about the way you'd think: