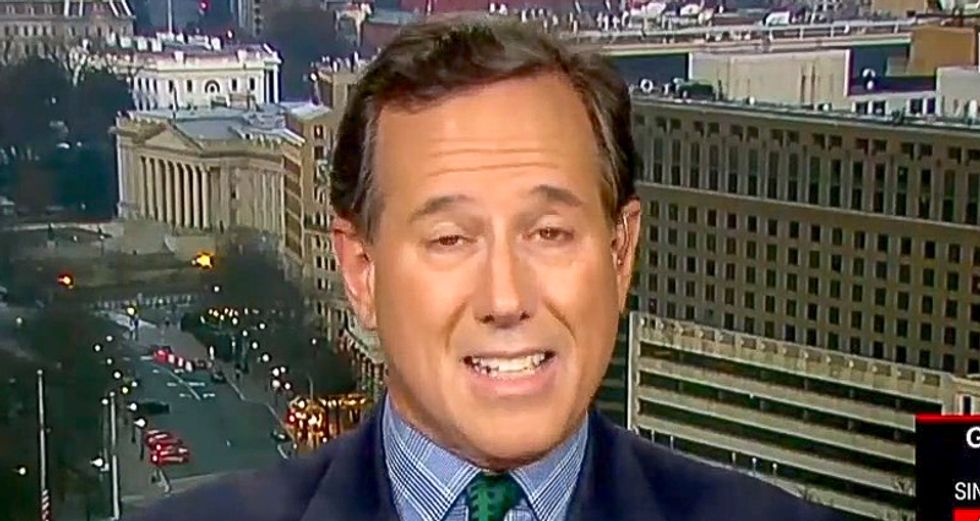 On Thursday, Republican strategist Rick Santorum claimed that the Black Lives Matter organization promotes "hate" while discussing the future of the Republican party.

During an interview with CNN's Anderson Cooper, Santorum argued that President Donald Trump's policies are more important than his bigoted rhetoric.

Political commentator Kristen Powers said that Trump's racist rhetoric towards women, minorities and advocacy groups like Black Lives Matter will hurt him in the future and that the Republican party has failed to see that.

At this point, Santorum chimed in an said that Black Lives Matter "promotes a lot of hateful things."

He then struggled to define exactly what he meant.

"What hateful things?" Powers asked. "I don't think you can come up with an example."

Santorum said that he believes black lives matter, but said the group should be held to the same standards as white people when protesting.

"There are all sorts of clips and posters of folks in these marches that are as racist on the other way as the white racists are to blacks," he said. "You just can't wipe away all of the things that are said and written and done at these marches as a fringe element any more than you would wipe those away from a group of whites doing the same thing."

"Black Lives Matter is the basic idea that black lives matter and we need to treat black lives with the same reverence we treat white lives," Powers said.