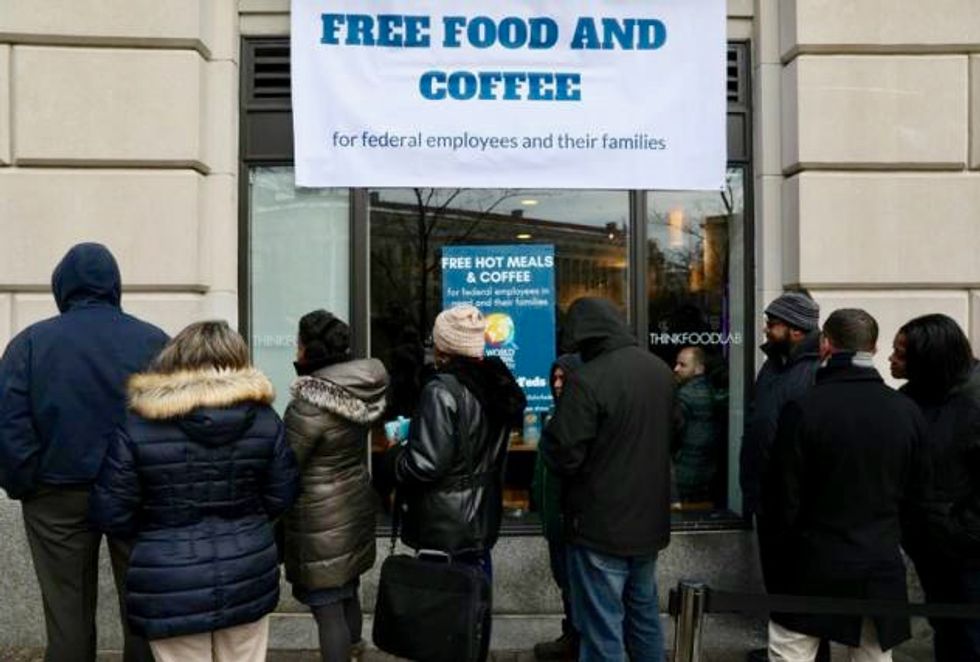 Maurice Wilson joined dozens of fellow federal workers in Washington on Wednesday at the opening of celebrity chef Jose Andres’ emergency kitchen, grateful for a free lunch of egg sandwiches, quinoa bowls and tomato soup as the partial government shutdown dragged on.

“Within another two weeks, I’m going to have to figure out a way to survive,” said Wilson, 59, who is working without pay at the Court Services and Offender Supervision Agency of the District of Columbia.

The “Chefs for Feds” kitchen, launched by restaurateur Andres’ non-profit World Central Kitchen, is the latest example of how food providers across the country are stepping up efforts to feed unpaid federal workers.

About 800,000 federal workers nationwide were either furloughed or working without pay as the shutdown marked its 26th day on Wednesday. U.S. President Donald Trump and Democratic congressional leaders remained deadlocked in their dispute over Trump’s demand for $5.7 billion for a wall along the border with Mexico.

Located between the Capitol and the White House, “Chefs for Feds” will serve free meals to federal government employees in need until the government reopens.

World Central Kitchen provides food for disaster victims around the world, including victims of Hurricane Maria in Puerto Rico.

“When we have mothers, families, that they don’t know what they’re going to eat, because they are not getting a paycheck, that to me makes it a humanitarian crisis,” Andres said in a Twitter video from Puerto Rico on Wednesday.

Waiting for the kitchen to open, Rebekah, a single mother with three children who did not want to give her last name, said her missed paycheck had forced her to take out a loan, file for unemployment and contact a temp agency while she waits to return to work at the Federal Aviation Administration.

“My kids are pretty worried,” she said. “I have a 16-year-old who’s trying to work extra hours and give me his paychecks even though I reassure him we’re going to be okay.”

Capital Area Food Bank, the largest distributor of food for soup kitchens and pantries in the Washington area, handed out food to federal workers at five locations on Saturday. The crowd was almost twice what they had expected.

This Saturday, the food bank will expand the number of locations and the amount of food it distributes, said Radha Muthiah, its chief executive officer.

Ebony Grays, a single mother working without pay for the Transportation Security Administration at O’Hare International Airport, shopped for groceries this week at the Lakeview Pantry in Chicago.

She said she may cut down on how much she eats to ensure that her children have enough food.

“It doesn’t seem like the leadership of the country understands the hardships that everyday Americans go through,” Grays said in a phone interview on her way to work.

Alana Miller, whose 2-year-old daughter Elliott licked melted cheese from a sandwich at the “Chefs for Feds” opening, said she appreciated the meal after her family of five’s income was cut in half by the shutdown.

“It gives us a sense of value,” she said.

Reporting by Katharine Jackson in Washington; Additional reporting by Suzannah Gonzales in Chicago; Editing by Colleen Jenkins and Marguerita Choy