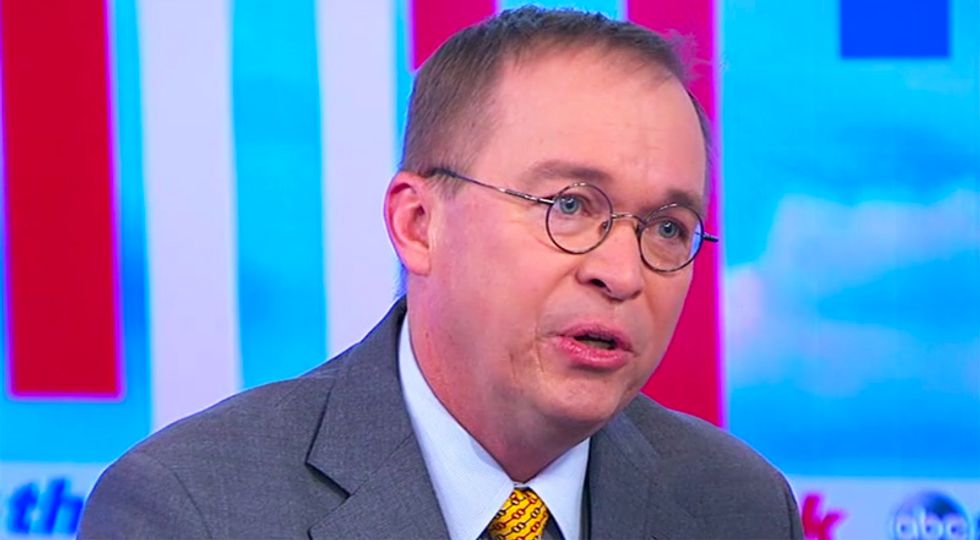 CNN host Jake Tapper pressed acting White House Chief of Staff Mick Mulvaney on Donald Trump's boast on Friday that he has been receiving calls from former presidents who support his wall -- only to haveMulvaney simultaneously duck the question while blaming Senate Minority Leader Chuck Schumer (D-NY) for it.

Questions have been raised which presidents Trump is talking about during his Rose Garden press conference, with led Tapper to grill Mulvaney about the truthfulness of the president's claim.

"President Trump on Friday tried to drum up support for the wall," Tapper began. "He said U.S. presidents have told him that they should have built the wall. Spokespeople for George W. Bush and Bill Clinton said that wasn't their boss that said that. Neither Barack Obama nor Jimmy Carter have ever endorsed the idea of a border wall. Who was he talking about?"

"My guess is this boils down to semantic difficulties we had with [Senate Minority Leader Chuck] Schumer just yesterday," Mulvaney deflected. "Mr. Schumer kept saying 'you don't have money for a wall now' and we're showing pictures of what we're building on the border with the money we received last year -- it's a very similar style to what the president wants to build in the future."

After Mulvaney diverted to discussing material being used to build the wall, Tapper pressed him again for presidential endorsers.

"You don't know what president it was?" he asked.

"I don't know what the presidents mean when they say they weren't supporting a wall," Mulvaney protested. "George Bush was president in 2006 when they signed a secure fence act which is what we're using to build the wall."

"I have no idea. I haven't asked the president that question," the chief of staff conceded.

.@jaketapper: Which former presidents told President Trump that they should have built a wall along the US-Mexico b… https://t.co/qvrqfzDG76
— State of the Union (@State of the Union) 1546784402.0