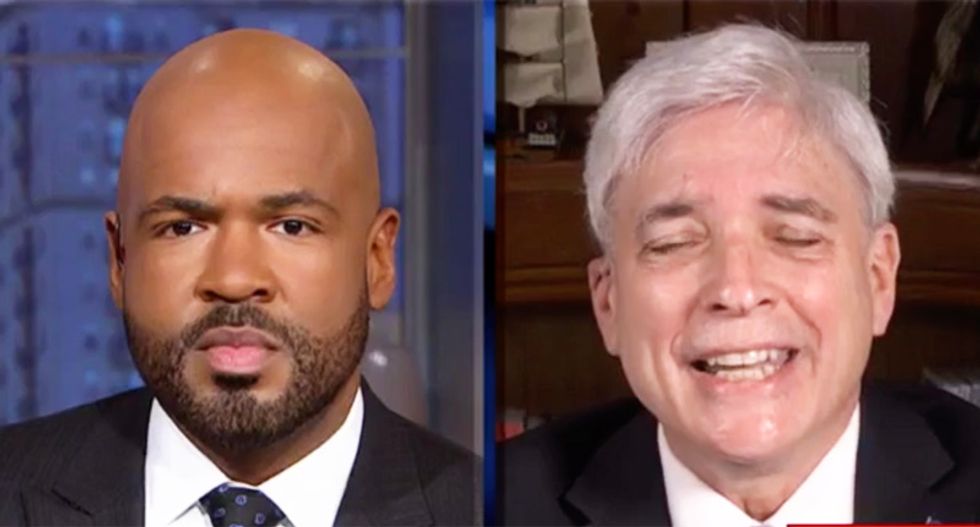 A former adviser to Donald Trump snapped back at a CNN host Saturday morning when he was confronted with archived video of the president lying about his wall multiple times -- then the host called him out.

Appearing with New Day host Victor Blackwell, Steve Rogers -- who served on Trump's Campaign Advisory Board -- was pressed on Trump's most recent comments on the wall which were juxtaposed with what the president has claimed in the past.

"Steve, can we clarify, get the truth on one of the president's lies from the Rose garden?" Blackwell challenged. "I'm going to play what he said yesterday and what he said during the campaign."

After watching the clips, Rogers dismissed Trump's ever-evolving definition of what constitutes a wall.

"What he said yesterday was a lie, it was not, Steve?" Blackwell pressed.

"I would not characterize what he said as a lie," Rogers attempted. "To begin with, there are certain areas of that border which the border patrol officers said should be made in concrete. He didn't lie, there is ---."

"He said yesterday, 'I didn't say it would be a concrete wall,'" Blackwell interrupted. "We just played -- I'm not reading from a document that they e-mailed. We played the president, then a candidate, saying out of his own mouth it's going to be a concrete wall. How was that not a lie?"

"Let me ask you something -- instead of focusing on something like that, why don't we ---," Rogers snapped back before being interrupted again.

"The truth? Instead of focusing on the truth?" Blackwell pressed.

"I'll give you the truth. The truth of the matter is there is a national security crisis on that border," Rogers said raising his voice. "That is what the American people care about. There is a national security crisis and that's what we should be focusing on. He did not lie, okay? He made it very clear that areas of that border should be made in concrete as at the recommendation of the officers who put their lives on the line there."

"It was a lie, and Mexico will pay for it," Blackwell mocked Rogers before cutting off the interview.