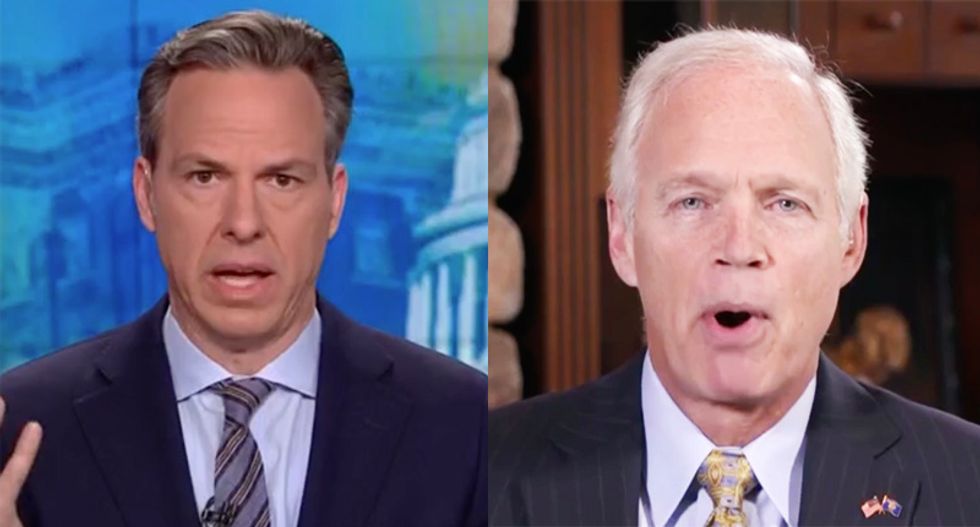 CNN host Jake Tapper used the legal troubles of former Trump campaign chairman Paul Manafort to shut down the wild ravings of a Republican senator accusing the Democratic Party of colluding with the Russians.

The State of the Union host asked Sen. Ron Johnson (R-WI) about reports that President Donald Trump was investigated by the FBI for possibly being a Kremlin agent, only to have the senator launch a diatribe attacking Democrats and the FBI.

"What evidence?" Tapper attempted as Johnson spoke over him.

"The American people," Johnson shot back. "We need the information on this so we can get past the innuendo and deal with facts because we have serious issues facing this nation and it's not good we have this cloud hanging over any administration whether it's this one or previous administrations or next administrations."

"We know for a fact that Paul Manafort provided campaign data to Konstantin Kilimnik who has ties to Russian military intelligence -- so there's that," Tapper interjected. "In terms of the collusion between the Democrats and ---"

"We also know for a fact, we also know Democrats paid for the Steele dossier," Johnson interrupted once again before proceeding to rant about corruption at the FBI as the CNN host looked on in puzzlement.

Ricardo Lopez, Minnesota Reformer
A GOP state senator on Friday asked his Facebook followers to donate to the legal defense fund of a family facing felony charges in connection with the Jan. 6 attack on the U.S. Capitol.

“Here's a local family in Lindstrom who can use some help," Koran wrote. “They attended the Jan 6th Rally and have been accused and charged with a variety of crimes. Some very serious and some which seem to be just to punish opposing views."

A non-fungible token (NFT) is a digital object -- a drawing, animation, piece of music, photo, or video -- with a certificate of authenticity created by blockchain technology.

The album was previously owned by Martin Shkreli, a disgraced executive sentenced to prison for fraud, and sold at auction in July as part of a deal to settle his debt to the US government.

Veteran actor Sherif Moneer, who walked out of a screening at Egypt's El Gouna Film Festival this month, has led a patriotic backlash against the film for "presenting Egypt negatively".

But others have praised director Omar El Zohairy for shedding light on a genuine social problem in a way that is both artistic and constructive.