Defenders of the MAGA-hat youth: Spare us your concern for children, please 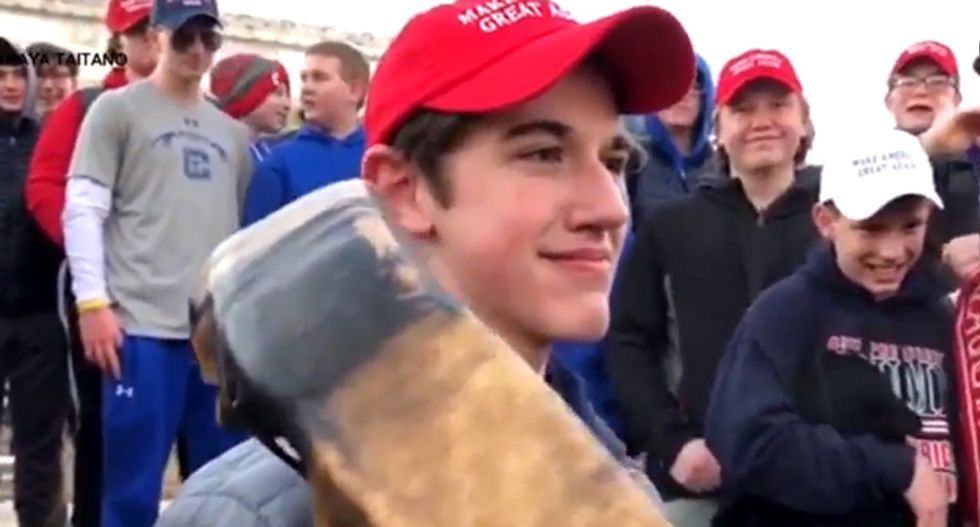 After observing the ongoing national tragedy of countless migrant teens and young children being herded into internment camps by the Trump administration, it’s especially rich to see the president’s disciples wailing and rending their sackcloth over the unfair treatment of a group of students from Covington Catholic High School.

An extended video that emerged over the weekend at least modulated the national outrage over the behavior of the students during March for Life protests at the Lincoln Memorial. But the truth remains that many of these boys ridiculed Nathan Phillips, a Native American elder and Vietnam veteran, with racist “tomahawk chops” and rain dance mockery. Regardless of what precipitated the confrontation, the kids still did what they did. Indeed, another video appears to show students from the same school sexually harassing a passerby. Later, one of the boys randomly shouted, “It’s not rape if you enjoy it.”

In other words, yes, social media users may have rushed to judgment before the full confrontation was revealed (as usual), but the reaction from Trumpers in defense of the students was itself, premature and ludicrously forgiving, as if these boys were guileless victims and not dishing out toxic behavior of their own.

The counterreaction from the Red Hats, including Trump himself on Twitter, was surely crafted in part by the Louisville PR firm RunSwitch, which was co-founded by Scott Jennings, a Republican political operative and adviser to Majority Leader Mitch McConnell. RunSwitch, it turns out, is representing Nick Sandmann, the Covington student seen face to face with Phillips in that video, and actively defending his actions with a “who me?” cover story.

Regardless of who started what, the Trumper fainting couch has been crowded the last couple of days. Red Hats are demanding apologies from liberals on Twitter and elsewhere. Donald Trump Jr. and others are laying it on thick: How could the left be so cruel to such sweet, innocent boys?

The truth is that the conservative entertainment complex, led by its chief propaganda network, Fox News, has a long history of relentlessly stalking, doxing and harassing children and other political noncombatants, most of whom aren’t participants in the daily shovel fights on cable news. As we’ve all witnessed over the years, punching down is a spectator sport for the Trump base. Let’s review.

Likewise, Fox News troll Jesse Watters made a name for himself by stalking and harassing homeless people, several of whom were mentally ill. And he did it for laughs. Among his other victims, Watters and his pals confronted the following:

Homeless Veterans, Jan. 31, 2008: Watters confronts the group outside Fox News headquarters as they try to deliver a petition to Bill O'Reilly.

Helen Jones-Kelley, director of the Ohio Department of Job and Family Services, Nov. 6, 2008: Watters follows Jones-Kelley -- after she refused to talk to him -- to a fire station, where a police chief intervenes to stop the harassment.

Jenna Kern, Member of the Unitarian Universalist Church, Aug. 21, 2008:  Watters confronts Kern in her driveway outside her home.

Dr. George Garcia, Boulder High School superintendent, May 29, 2007: Watters confronts Garcia on a wooded road away from his school.

Consequently, Watters is now a regular on-air host, proving that being a smirking, insufferable crap-goblin pays well inside the Fox News bubble.

My point is that Trumpers practically invented this genre of political f**kery for ratings -- playing it, shockingly but not surprisingly, as comedy. Indeed, Fox News is ground zero for bullying and intimidating children (for starters) who never confronted or mocked anyone. Hell, Graeme Frost merely asked Congress to let him keep his health insurance -- a far cry from petulantly tormenting a Native American elder, irrespective of what led up to the event.

So spare us your “think of the children!” outrage, Trumpers. Until you aim the brims of your Chinese-made MAGA hats at the unapologetic bullies in your own ranks, your misplaced righteous indignation and pious finger-wagging only betrays your own smug history of targeting the innocent.