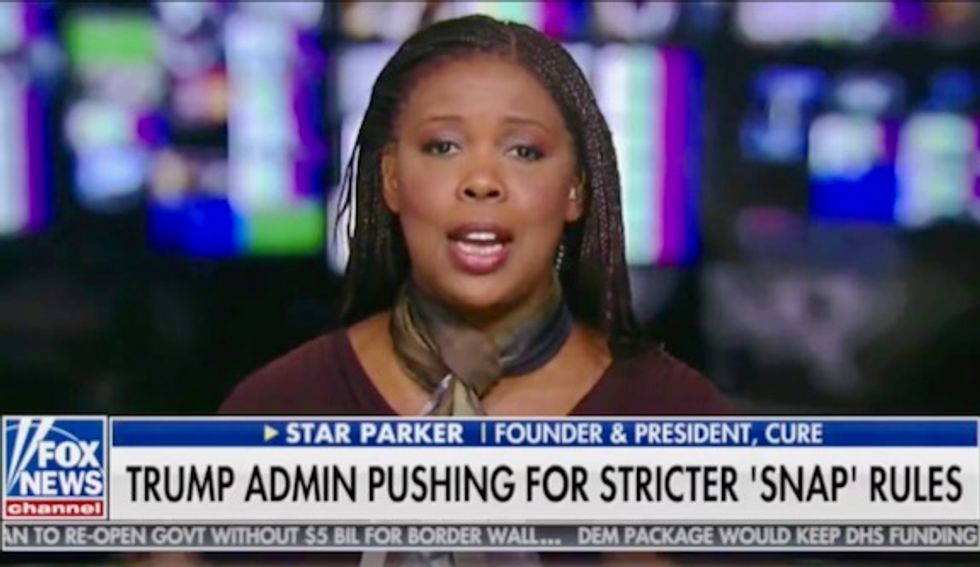 Parker, a far right wing pundit who espouses anti-LGBTQ and pro-white racist positions on Wednesday lamented that under President Barack Obama the stigma of public assistance programs was eliminated. She claims embarrassing people who need to use welfare programs is helpful.

She also claimed that the federal government's Supplemental Nutrition Assistance Program (SNAP) program use of a debit-type card instead of "food stamps," as the program is still often called, turns welfare programs from short-term assistance into a "generational" tool.

Parker touted the strong economy, which includes a low unemployment rate, which makes it harder for those without a job to find one.

The Trump administration is working to allow states to reduce access to food stamps by increasing work requirements, despite the fact that a large portion of food stamp users are single parents with children and no access to affordable day care, along with the elderly, and those who are unable to work.

"Close to 70 percent of SNAP participants are in families with children; more than one-quarter are in households with seniors or people with disabilities," Stone says. "SNAP provides only a modest benefit (on average, less than $1.40 per person per meal), but research shows that SNAP reduces poverty and food insecurity and, over the long-term, that means better health and economic outcomes for SNAP recipients, especially those who receive it as children."

Here's Parker on national television advancing the idea that's it's good to embarrass low-income workers and others who need federal government assistance:

Parker has written books with titles including, "Pimps, Whores and Welfare Brats: From Welfare Cheat to Conservative Messenger," and "Uncle Sam's Plantation: How Big Government Enslaves America's Poor and What We Can Do About It."