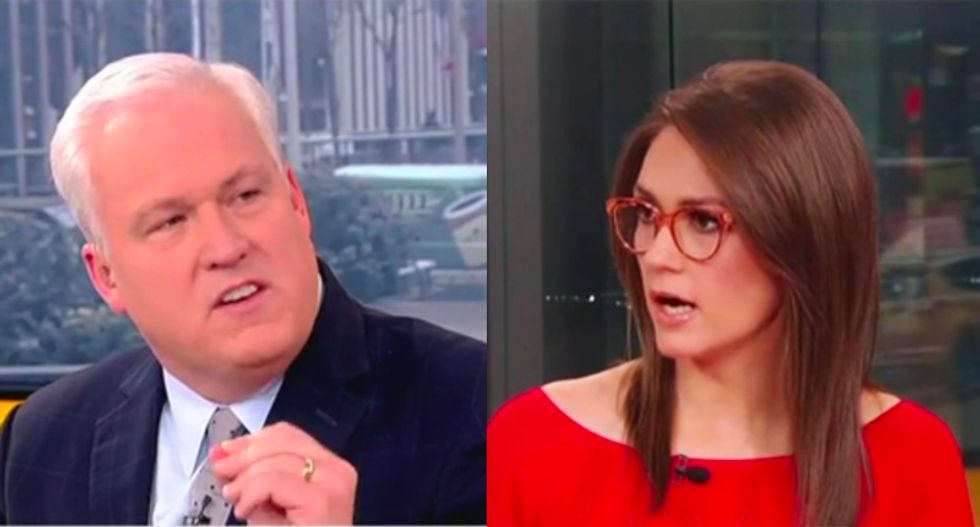 A panel discussion on Fox's "Outnumbered" grew heated on Friday afternoon as an avid supporter of President Donald Trump kept dismissing all the Russia allegations -- and the indictments of Trump officials -- as no proof of collusion.

In a frantic exchange between conservative activist Matt Schlapp and Fox News regular Jessica Tarlov, Schlapp tried to knock down her points about continuing revelations about the Trump 2016 presidential campaign by mockingly repeating, "No collusion, no collusion."

Addressing the bombshell BuzzFeed report Tarlov claimed, "So we wait to find out what the sources are. But free to sit there and say, 'No collusion, no collusion.' That has backfired."

"You think that's breaking the law? Oh, my gosh," Schlapp shot back.

"You're not actually taking what I'm saying to heart and to respond to it, you are out with euphemisms -- like Guiliani, 'No collusion!'" Tarlov parried.

"I want you to respond to the fact that when they do have a number of indictments they do have cooperating witnesses, Rick Gates, Paul Manafort, Michael Cohen -- we've indicted 12 Russian trolls is that they were involved in this," Tarlov continued. "How can you sit there and say unilaterally, 'No collusion?'"

"Let me answer," Schlapp interrupted. "Because none of those people were convicted on anything having to do with inappropriate or illegal behavior."

"Really?" the stunned Fox News personality replied. "Donald Trump directing Michael Cohen to pay off women so it's not affecting the election? That's specifically what he does."

"It isn't? It's a campaign finance violation," the exasperated Tarlov shot back.

"It isn't, because no one has been indicted over it," Schlapp retorted leaving Tarlov speechless.

The first month of Joe Biden’s administration could be the deadliest period in the nation’s COVID-19 pandemic, one of his top officials warned Sunday. Dr. Rochelle Walensky, who is nominated to lead the U.S. Centers for Disease Control and Prevention, expects the country’s coronavirus death toll to reach 500,000 by mid-February. That would be a jump of about 100,000 in just a few weeks since the number of confirmed deaths was just short of 400,000 on Monday. “By the middle of February, we expect half a million deaths in this country,” she told CBS’ “Face the Nation” on Sunday. The grim predict...