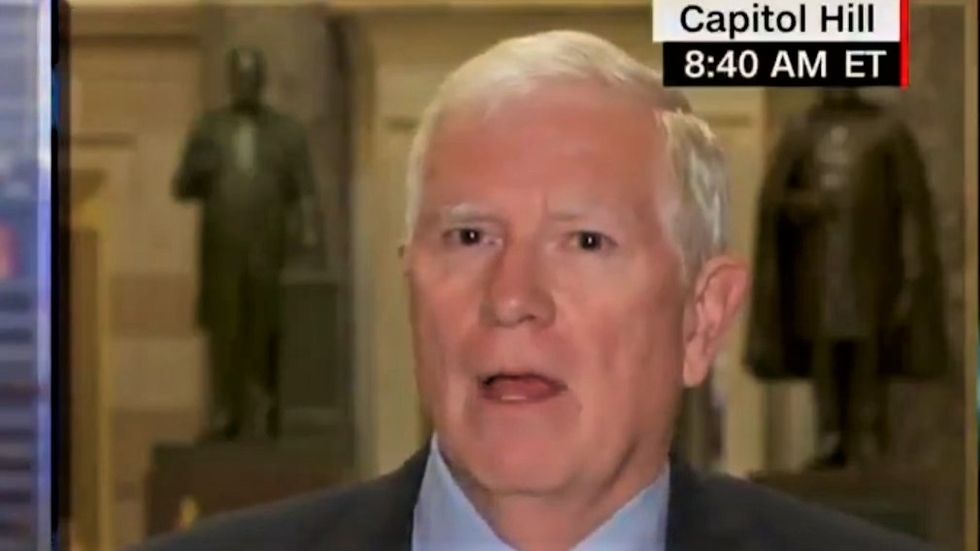 Rep. Mo Brooks (R-AL) on Friday appeared to short circuit after CNN's John Berman asked him if a Democrat president could in the future use the precedent being set by President Donald Trump to unilaterally declare climate change a "national emergency."

During a discussion about Trump potentially bypassing Congress to order the construction of his border wall by declaring a "national emergency," Berman asked Brooks what he would think of a future Democratic president using the same tactics to address climate change.

"I'm sorry, you'd have to... that was kind of convoluted, the way I heard it, could you please restate it?" Brooks said in response.

"What I'm saying is, if the president can make the claim that national security money, emergency money is needed for a wall, could a president at one point say it's needed to fight climate change?" he asked.

At this point, Brooks' eyes darted about and there was an uncomfortable pause before he responded.

"I would have to look at the specific statutes to see what you can and cannot do," he said. "This is so far out there..."

"Why?" Berman interjected. "If it's a matter of national security and the president deems it so, why is it outside the purview of the law?"

"I don't see how that example that you gave affects the national security of the United States," he replied.

"The Pentagon and the intelligence services often talk about the affects of climate change," Berman shot back.

CNN: If the president can declare a national emergency to build a border wall, couldn't a Democrat do the same to a… https://t.co/T9NYzRFQjQ
— Aaron Rupar (@Aaron Rupar)1547214474.0

In video captured by a New Yorker reporter, pro-Trump insurrectionists are filmed rifling through documents left behind by lawmakers who fled for their lives and using their phones to take pictures of what they found while others trashed the place.