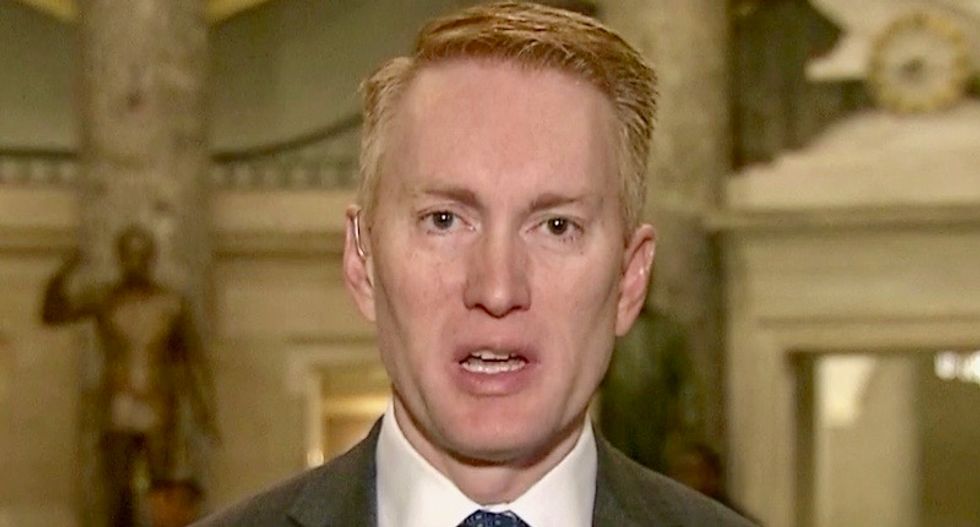 On Tuesday, a bungled redaction by attorneys for Paul Manafort revealed that President Donald Trump's former campaign boss held an overseas meeting with accused Russian spy Konstantin Kilimnik and shared polling data with him in the runup to the 2016 campaign.

On Wednesday morning on CNN, Sen. James Lankford (R-OK) defended Manafort's meeting with the Russian spy by arguing that Manafort, who had worked on behalf of a pro-Russian political party in Ukraine, had known the spy for many years and that there was nothing odd about a presidential campaign sharing confidential campaign polling data with a foreign adversary.

Lankford described Manafort's work on behalf of a pro-Putin "puppet" who fled the country under charges that he orchestrated mass killings and is now in hiding under Putin's protection in Russia, as doing work for "the Ukranian government."

Special counsel Robert Mueller has accused Kilimnik of ties to Russian intelligence, but Lankford described him as a former military man.

"This person also previously worked for the Russian military, so did most everybody in that, so I don't see this as a deliberate contact with the Russian government, this is a person that he'd worked with for a decade and a half at that point, in Ukraine," he said.

"We need to get the whole story on it because it makes it seem like it was some secret backchannel communication," he said of the secret backchannel communication between the Trump campaign and a charged Russian spy which Manafort lied to investigators about. "If it was, this was someone that Paul Manafort had known for a very long time and trusted."